Today marks the latest round in the Great Boston Casino Slapfight between Wynn Resorts (wants to bring gambling – sorry, gaming – to Everett) and Mohegan Sun (wants to build a stately pleasure dome in Revere).

Slappy Bird #1 is running its second newspaper ad in an attempt to swing public opinion in its favor. From today’s Boston Globe’s op-ed page, in two pieces for legibility (the same ad ran in today’s Boston Herald as well): 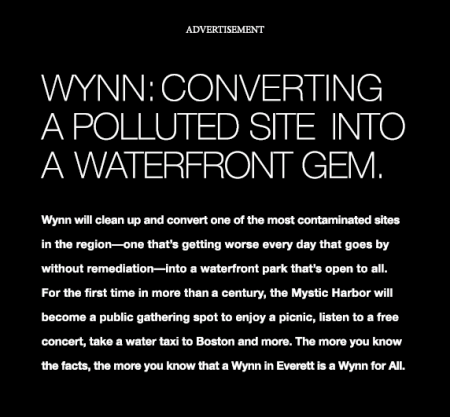 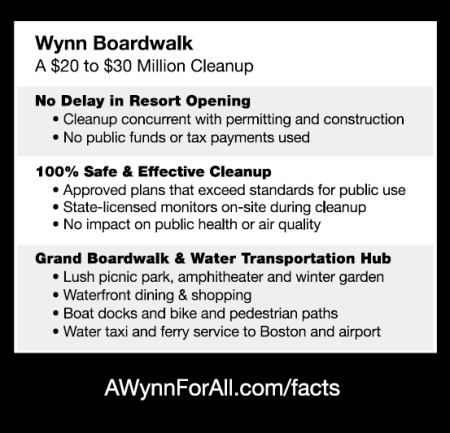 Not everyone is buying into that sunny-side-up projection, though. Last month the Globe reported that any cleanup comes in the wake of new state environmental regulations, slated to take effect this spring, “[that] would double the amount of lead and increase by 150 percent the amount of arsenic allowed to remain in dirt 15 feet or more below the surface.”

That has the eco-set all lathered up, despite assurances from Wynn’s hired hands.

Officials representing Wynn Resorts, which has promised to spend as much as $30 million over about six months to clean the property, said the proposed regulations would have little impact on their plans.

“Any cost differential of the new regulations is marginal,” said Larry Feldman, a senior principal at GZA GeoEnvironmental, an environmental consulting firm in Norwood, who helped draft Wynn’s remediation plan and who sits on the environmental agency’s waste site cleanup advisory committee. “It’s not a big issue.”

That’s a classic content-free corporate statement, unlikely to satisfy local residents “worried that construction activity would produce dangerous dust particles of arsenic and lead that could be sent airborne and settle in the neighborhood, leach into the Mystic River, and get spread by trucks moving the dirt elsewhere.”