Herald Tells Half the Story on Remy WEEI Interview

Jennifer Martel’s father said he has “mixed feelings” about Red Sox icon Jerry Remy’s lengthy and defensive radio interview yesterday, in which the NESN color man admitted he and his wife enabled their alleged killer son but denied coaxing Martel into dropping a

restraining order shortly before her murder . . .

In the interview — Remy’s first extensive comments about his son — the second-baseman turned broadcaster and restaurateur said he never got Jared Remy his Red Sox security job, didn’t know the bodybuilder was using his allowance on steroids, and defended his record as a grandfather to the couple’s 5-year-old daughter, Arianna. A custody settlement reached this week awards the Remys visitation while giving guardianship to Martel’s parents.

But the foggy local tabloid left out how Remy “defended his record as a grandparent”  – by attacking Herald columnist Margery Eagan for this piece questioning the wisdom of giving Jerry and wife Phoebe Remy shared custody of their granddaughter Arianna, whose mother, Jennifer Martel, Jared Remy allegedly murdered.

Jerry Remy Does Not Like To Be Called a Bad Grandparent

Remy shot back at a Herald column that wondered whether he’s fit to see his granddaughter.

NESN Red Sox commentator Jerry Remy gave a fascinating interview to the Dennis & Callahan radio show that shed light on which criticisms gets most under his skin in the wake of his son Jared’s alleged murder. 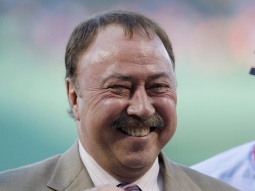 Remy won’t be stepping down from his position at NESN, but he acknowledged the calls for him to quit, the accusations that he failed as a parent, and the recent Globe investigation into his son Jared Remy’s criminal history. He only sounded an angry note when seemingly alluding to a Margary Eagan column in the Herald suggesting the Remys shouldn’t have partial custody of their granddaughter.

You know I read a column yesterday that comes out and says we’re bad parents and we shouldn’t even be allowed to see our granddaughter because what will we do, have pictures of our son all over the house? I mean we’re not stupid … It’s that kind of reporting that is disgusting to me because what are we going to do, bring our granddaughter into the house, show her pictures of daddy? Give me a break. Have her on the phone with him from the can? Give me a break. Take visitations to jail? Give me a break. I mean, we’re not stupid either. So it’s those kind of things that upset me a bit.

Apparently it upset the Herald too, since they left that part out.