From our Don’t Shoot the Messenger desk

It all started with the Boston Herald’s Thursday Page One. 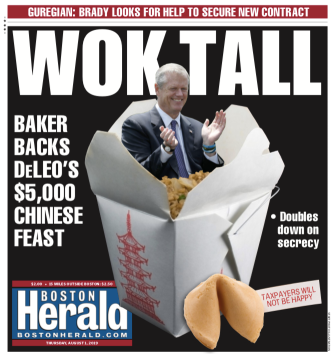 Crosstown at the Boston Globe (which – full disclosure – is not really crosstown since the Globe moved to State Street and the Herald moved to Braintree), busibody columnist Shirley Leung quickly registered her objections.

I won’t use the “R-word” to describe the front page of Thursday’s Boston Herald, with its “Wok Tall” headline and a clumsy photo illustration depicting Governor Charlie Baker sitting in a giant Chinese takeout box of fried rice.

That’s because our country is so polarized we can’t even agree what is racist and what is not anymore. But for sure, the Herald front page is highly offensive to Chinese-Americans like me — and it should be to everyone else.

Wok jokes are straight out of the 1970s. They weren’t funny then, and they aren’t funny now. What does “Wok Tall” even mean, anyway?

Well, here’s what it meant to the Twitterverse’s umbrage-industrial complex.

(Editor’s Note: Kirk Minihane and Shirley Leung have a history.)

This isn’t over – not by a long shot.

The Yin & Yang of the Globe & Herald

From our One Town, Two Different Worlds desk (in cooperation with our Late to the Party desk)

Boston sports radio station WEEI — which has been trounced by rival “98.5 The Sports Hub” and is taking a ratings beating because of the cellar-dwelling Red Sox — found itself in hot water yesterday after one of its jock talkers made vulgar on-air comments about a female sportscaster.

“Dennis & Callahan” sidekick Kirk Minihane ended up apologizing for his demeaning remarks about Fox Sports reporter Erin Andrews, but not before the whole brouhaha had some wondering whether it was all a desperate bid to boost ratings.

Groovy. But here’s how the Boston Globe reported it, Metro page 1:

Stomping onto the dangerous turf of talk radio, gubernatorial candidate Martha Coakley called out a WEEI radio host for an on-air tirade in which he lambasted FOX Sports reporter Erin Andrews, cursing about her and telling her to “drop dead.” 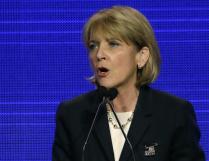 The rant on the “Dennis & Callahan Show” Wednesday morning prompted Coakley to contact a reporter covering the story to weigh in and later prompted an apology from the radio personality.

“Everybody understands fair criticism,” Coakley told Boston.com. “But when it becomes personal, when it’s demeaning, and when it goes over the line as this did, that language is inexcusable, and it’s offensive. I just felt it was important for me to weigh in.”

Meanwhile, here’s what the stately local broadsheet featured on its front page:

That stands in stark contrast to the frosty local tabloid’s take:

Gov urged to just say no

Bay State lawmen and lawmakers are urging Gov. Deval Patrick to reject President Obama’s request to shelter some of the thousands of children who have been surging across the nation’s southern border illegally, while immigration advocates are calling the crisis a 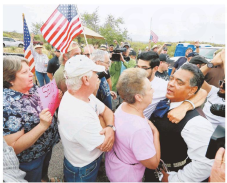 “As long as there are signals being sent out that people can come here illegally and we’re just going to take care of them, then they’re just going to keep on coming,” Bristol County Sheriff Thomas M. Hodgson said yesterday from the Texas border on a fact-finding tour. “Neither the president nor the governor have come down to the border to see what’s happening — had they taken the time to come down, they would understand why sending people to Massachusetts is not the answer.”

(Can we just interject here that Tom Hodgson is the biggest media slut this side of Kim Kardashian? Thank you.)

That’s not even to deal with the hiss & hiss treatment of the BRA in yesterday’s local dailies. (Roll your own.)

It’s swell to live in a two-daily town, yeah?

As the hardreading staff previously noted, last week Herald columnist Margery Eagan went sour on NESN broadcaster Jerry Remy’s return to the booth, and, in an interview on WEEI’s Dennis & Callahan show, Pres. Red Sox Nation returned the flavor, ripping Eagan’s column without naming her. (Neither, oddly, did the Herald in reporting the Remy interview.)

Today the Boston Strong Girl is back in the ring, counterpunching with this piece.

They tell me I ticked off Jerry Remy.

Last week I wrote a column asking why Jerry and Phoebe Remy would seek custody of their granddaughter Arianna. Their son is in jail, accused of stabbing 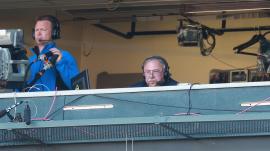 Arianna’s mother to death. Remy’s other two children also have a history of arrests for violent attacks.

Questioning his ability to be Arianna’s grandparent made Jerry Remy mad. He went on WEEI with Herald columnist Gerry Callahan and called what I wrote “disgusting.”

Well, I may disgust him again today for asking why he won’t do the right thing by Red Sox Nation and step aside at NESN.

Eagan concludes with this: “[E]verywhere you look along the long, ugly road that put Jared [in jail], you see Jerry and Phoebe Remy, too. There just can’t be a RemDawg anymore.”

Herald Tells Half the Story on Remy WEEI Interview

Jennifer Martel’s father said he has “mixed feelings” about Red Sox icon Jerry Remy’s lengthy and defensive radio interview yesterday, in which the NESN color man admitted he and his wife enabled their alleged killer son but denied coaxing Martel into dropping a

restraining order shortly before her murder . . .

In the interview — Remy’s first extensive comments about his son — the second-baseman turned broadcaster and restaurateur said he never got Jared Remy his Red Sox security job, didn’t know the bodybuilder was using his allowance on steroids, and defended his record as a grandfather to the couple’s 5-year-old daughter, Arianna. A custody settlement reached this week awards the Remys visitation while giving guardianship to Martel’s parents.

But the foggy local tabloid left out how Remy “defended his record as a grandparent”  – by attacking Herald columnist Margery Eagan for this piece questioning the wisdom of giving Jerry and wife Phoebe Remy shared custody of their granddaughter Arianna, whose mother, Jennifer Martel, Jared Remy allegedly murdered.

Jerry Remy Does Not Like To Be Called a Bad Grandparent

Remy shot back at a Herald column that wondered whether he’s fit to see his granddaughter.

NESN Red Sox commentator Jerry Remy gave a fascinating interview to the Dennis & Callahan radio show that shed light on which criticisms gets most under his skin in the wake of his son Jared’s alleged murder.

Remy won’t be stepping down from his position at NESN, but he acknowledged the calls for him to quit, the accusations that he failed as a parent, and the recent Globe investigation into his son Jared Remy’s criminal history. He only sounded an angry note when seemingly alluding to a Margary Eagan column in the Herald suggesting the Remys shouldn’t have partial custody of their granddaughter.

You know I read a column yesterday that comes out and says we’re bad parents and we shouldn’t even be allowed to see our granddaughter because what will we do, have pictures of our son all over the house? I mean we’re not stupid … It’s that kind of reporting that is disgusting to me because what are we going to do, bring our granddaughter into the house, show her pictures of daddy? Give me a break. Have her on the phone with him from the can? Give me a break. Take visitations to jail? Give me a break. I mean, we’re not stupid either. So it’s those kind of things that upset me a bit.

Apparently it upset the Herald too, since they left that part out.

The local dailies turn a quick double play today in their coverage of the shakeup at former sportstalk powerhouse WEEI.

Start with the Boston Herald, which goes all Page One over the firing of longtime WEEI VP of programming/operations  Jason Wolfe – except it’s really about Gerry Callahan, a WEEL morning drive personality and a sports columnist for the feisty local tabloid in his spare time.

WEEI morning men John Dennis and Gerry Callahan — blindsided by the firing of boss Jason Wolfe yesterday — said they have been assured that station suits want them to be “part of the solution” to the once-dominant sports station’s ratings woes.

Callahan, a Herald sports columnist, said Entercom Boston general manager Jeff Brown told him and Kirk Minihane, who was added to the morning show in February, that “we’re going nowhere.” And Dennis, who is on vacation this week, said Brown called him after Wolfe got the ax to reiterate that the morning show was not in any danger.

“We’re going nowhere,” eh? All depends on how you hold that one up to the light.

The Herald throws some stats into the mix as well, which illustrate the drubbing WEEI has taken from CBS-owned 98.5 The Sports Hub:

In the most recent ratings period, The Sports Hub’s top-rated morning show, Toucher and Rich, dominated with a 13.4 share. Dennis and Callahan finished fifth with a 6.0. The Sports Hub was No. 1 overall with men age 25-54, both stations’ target audience, while WEEI was fifth, according to Arbitron.

For dessert, the Herald serves up some Howiesnark:

For all of Wolfe’s success at WEEI, he was also complicit in its recent struggles and the attitude that got it there. The station easily vanquished upstart challengers such as WWZN 1510 and ESPN 890 during the 2000s. Neither station had the signal or the resources of WEEI. But in continuing its dominance, the station’s hubris rose, and it radiated as arrogance through the airwaves.

There was a collective sense that those at WEEI believed their success was much more to do with them than with their comparatively strong signal, their broadcast rights deals (particularly with the Red Sox), and Boston fans’ insatiable desire for any level of sports discourse.

But then came The Sports Hub, and ‘EEI got smoked.

When 98.5 The Sports Hub launched in August 2009 — a station with CBS Radio’s support, broadcast rights deals with the Patriots and Bruins, and a strong FM signal — WEEI was outwardly dismissive of the potential competition despite its vast resources.

And its complacent actions — including dotting its programming with back-slapping D-list personalities — suggested [The Sports Hub] was just one more competitor that would fade to static soon enough.

ENHHHH! We’re sorry, that’s incorrect – but thanks for playing!