Poor Jane Rosenberg, the courtroom artist whose drawing of Tom Brady during a Deflategate hearing, well, blew up last month. Rosenberg got her mulligan yesterday, a matter of great interest here in Bradyville.

The Boston Globe’s Namesniks gave her new sketch a thumb’s up.

Everyone likes a good comeback story. On Monday, courtroom sketch artist Jane Rosenberg got hers. 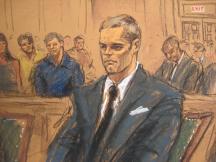 Rosenberg made national news Aug. 12 after her less-than-flattering sketches of Tom Brady from his Deflategate hearing went viral. She told the Globe that day, of her courtroom work, “I don’t tend to flatter people and make them look beautiful.” Later she said she received hundreds of e-mails from fans who were unhappy with the depiction of their quarterback. But on Monday, after Brady left the courtroom, Rosenberg unveiled her new look for the Patriots star. Looks more like the guy we know, right?

Actually, no, according to crosstown rival Boston Herald. 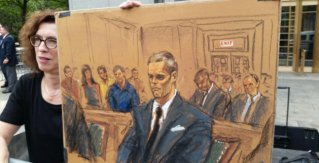 Courtroom sketch artist Jane Rosenberg got another crack at drawing Tom Brady following a disastrous first attempt that depicted the Patriots quarterback as ghoulish and uncomely, opening her up to ridicule and scorn from Patriots nation.

Unfortunately, her second sketch bears a striking resemblance to the wrong All-Pro quarterback.

Yesterday’s press conference in the wake of the latest Act of Goodell was, of course, no exception.

Page One of the Boston Globe’s Sports section: 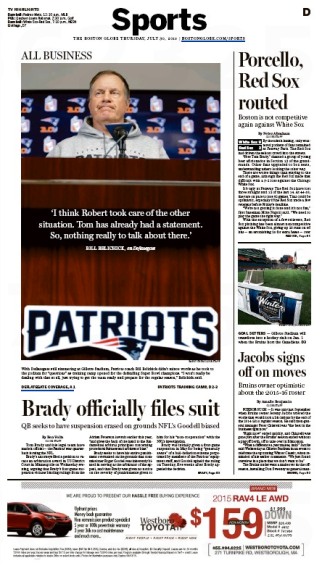 Didn’t mince words? Not to get technical about it, but that’s all Belichick does.

Media member: “Do you believe Tom Brady when he says that neither he nor anyone in the Patriots organization did anything wrong?”

Media member: “Is there something flawed about the system here in the organization that you keep ending up in these cheating controversies? Can you explain why?”

Media member: “Could you elaborate a little?”

Media member: “Why not?”

Belichick: “Because it’s already been addressed.”

And Herald columnist Karen Guregian gave the Globe a bit of an English lesson.

Robert Kraft’s on-again, off-again war with Roger Goodell and the NFL is back on . . .

There was no mincing words. Kraft believes he got screwed when he put his reputation on the line with Patriots fans by standing down and choosing not to fight the league’s unprecedented punishment of his team.