Remember those two knuckleheads who had the bright idea of scamming the One Fund Boston out of $2.2 million by claiming an aunt had been maimed in the Marathon bombings?

Last we heard from them, Branden Mattier had filed suit against the State Police and FedEx in December for “[violating] his constitutional rights when he was arrested in July after allegedly signing for a bogus $2.2 million check from One Fund Boston.”

And knuckleheaded as ever, which Laurel Sweet’s Boston Herald report confirms.

A South End rapper texted his brother he was moved to “real tears of joy, dawg,” upon learning The One Fund Boston had approved them for a $2.2

million payday based on their bogus claim that a long-dead aunt had lost both her legs to last year’s deadly Boston Marathon bombings, according to grand jury testimony their lawyers have filed in the case.

Branden “The Real SouljaBoy” Mattier, 23, told Domunique Grice, 28, the pair would be moving to “a place where only royalty lives” courtesy of their newfound wealth and the black Mercedes-Benzes they’d soon be driving.

Those are just a few of the roughly “40,000 texts between them police said they recovered from Mattier’s iPhone, according to voluminous documents filed Friday in Suffolk Superior Court.”

Here are a few more: 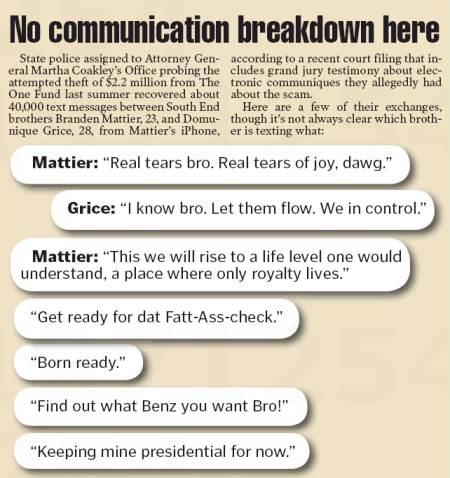 According to Sweet, “[t]he brothers were due to face a jury next month on charges of conspiracy, identity fraud and attempting to commit a crime, but the trial has been postponed indefinitely.”

But SouljaBoy will be in court on Thursday hoping to suppress recorded statements he made to police last July.

Maybe the Boston Globe will cover that. Because right now this one is all the Herald’s.

From our One Town, Two Places desk

Once again the local dailies live in parallel universes. 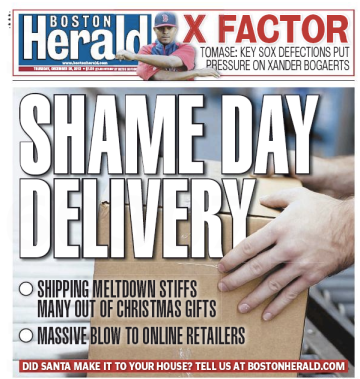 A Christmas delivery meltdown that saw retailers and shippers failing to del­iver gifts on time for the holiday could spur an upheaval — and even a backlash — in online shopping, experts said yesterday, as consumers took to social media to vent their spleen.

“I think too much was promised because the  industry and the carriers  underestimated how much demand there will be for that last-minute type of delivery. I don’t think there’s any doubt that a lot of consumers and stores alike were really besieged at the last moment,” said Jon Hurst, president of the  Retailers Association of Massachusetts. 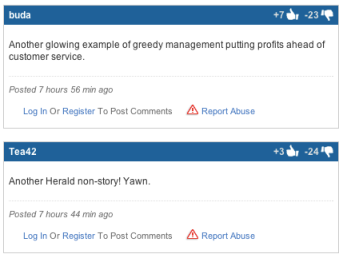 Inevitably, the feisty local tabloiders wound up turning on each other: 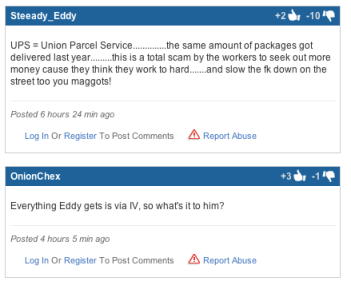 Crosstown at the Boston Globe, the story was . . . lost in transit.

Today’s stately local broadsheet has nothing on the carriers putting the X in Xmas, but it did have this helpful primer on returning gifts.

The garish sweater from your aunt. The Chia Pet from your brother-in-law. The PlayStation game from a grandmother who forgot you have an Xbox. Getting rid of unwanted gifts is as much a holiday tradition as receiving them. 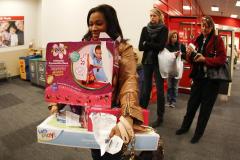 About one-third of consumers returned at least one gift last year, according to the National Retail Federation, and many still do it the old-fashioned way: at a store’s customer service counter.

But before you get in line, take some basic steps to make it less aggravating.

Most crucially, if you received a receipt with your gift, keep it until you are sure you won’t be returning the item, said Edgar Dworsky, the Somerville-based founder of the consumer advocacy and education site ConsumerWorld.com.

Really? A lot of people include a receipt with their Christmas presents? The hard gifting staff had no idea.

One last thing: This time, at least, the Herald had the better nose for news. The Wall Street Journal had the carrier meltdown on its front page today, and the New York Times ran it on D1 of the Business section.