As the hardreading staff has often noted, the local dailies have created One Town, Two Different Worlds more days than not.

But . . . One Town, Two Different Thermometers? 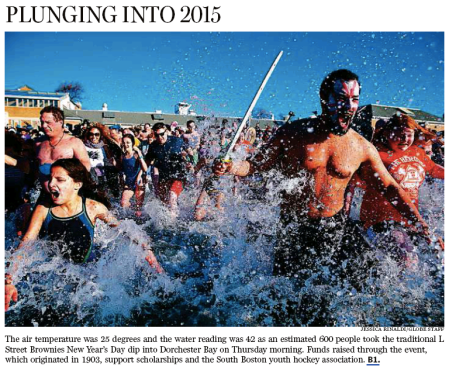 Right – it’s not just the air temperature they differed on, it was the water temp too.

“It was warmer in the water because the air temp was down to the teens with the wind chill,” said Freddy Ahern, coordinator for the BCYF Curley Community Center. The water was a balmy 37 degrees.

Happy New Year to all! Keep up the good work.

Proposal is richest to a city near planned Everett casino

Wynn Resorts has offered the City of Boston $1 million upfront and $2.6 million annually, along with hiring preferences for city

residents, as compensation to offset the possible effects of a planned hotel and gambling resort on the Mystic River waterfront in Everett.

It is the richest deal Wynn offered to any community around the company’s planned resort, but far less than the $18 million annual payment promised to Boston by a rival applicant, Mohegan Sun, which is proposing a Revere casino.

The best-and-final offer Wynn Resorts made to Boston — but Mayor Martin J. Walsh rejected — to soften the impact of the casino it

wants to build in Everett called for $6 million in one-time payments and $2.6 million annually, according to a copy of the deal obtained by the Herald.

The cash pales in comparison to the $30 million upfront and minimum annual $18 million pledged to Boston by rival Mohegan Sun for a gaming resort on the Revere side of Suffolk Downs.

Boston Herald No Longer a Lively Index to the Globe

For years the hardreading staff has described the feisty local tabloid as a sort of sprightly daily summary of the Boston Globe.

The  crosstown rivals are absolutely living in parallel universes at this point.

Exhibit Umpteen: There are three big local stories on the front page of today’s Globe – the region’s big hit from climate change; GOP gubernatorial wannabe Mark Fisher’s alleged shakedown of state party officials in return for his dropping out of the race; and Boston College’s returning its Belfast Project tapes to the interviewees to avoid more mishegoss like last week’s Gerry Adams rumpus. 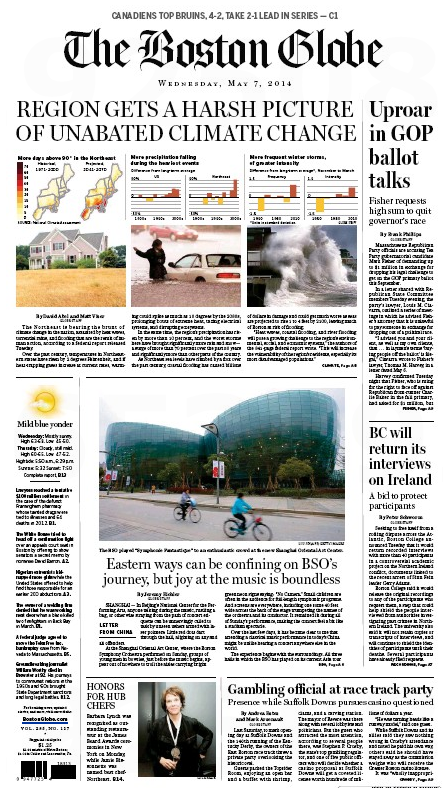 Exactly none of those three stories appears in the Herald.

Then again, there is this kickoff to the Herald’s two-part series on Bay State legislative shenanigans, which gets just about all of Page One:

And let’s not forget this exclusive from Track Gal Gayle Fee: 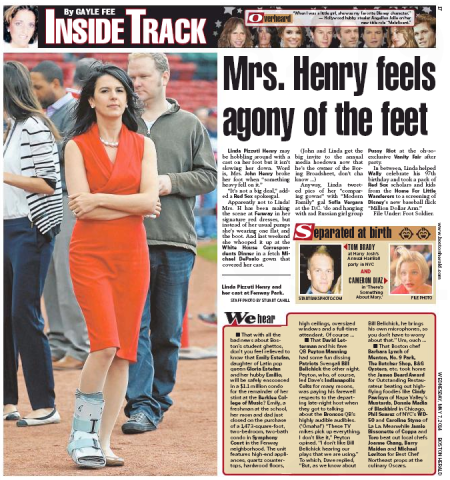 Those Namesniks at the stately local broadsheet need to get crackin’, yeah?