Those fine folks at the feisty local tabloid have done it again!

That’s right – the Herald has nabbed yet another coveted Top Ten Front Pages nod from the Newseum. (No link to yesterday’s – they’re not archived as far as the hardreading staff can tell.)

This is the fifth or sixth time the paper has trumpeted one of these impressive victories, which leads us ask: If the Boston Herald garners a Top Ten but does not tout it the next day, did the award actually happen?

So what pops up on page two of today’s Boston Herald but . . . Page One.

Welcome, everyone, to the Page One Blog, where we’re going to provide some information and details on each day’s Boston Herald cover. 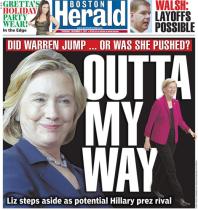 As Page One Editor, it is my goal — working in conjunction with Editor in Chief Joe Sciacca and Managing Editor/Creative Gustavo Leon — to produce an impactful, interesting and engaging cover page. The emphasis on Page One is solely only-in-the-Herald content, be it stories broken by our reporters, exclusive interviews, the passionate opinions of our news, political and sports columnists, or simply a compelling staff photograph. Obviously, there’s excellent material to work with!

If they do say so themselves.

Today’s Boston Herald has a swell time patting itself on the back for yet another mention by “Journalism’s own hall of fame” – that would be The Newseum – in its daily Top Ten Front Pages feature.

Under the headline “Sports Stories” there’s this:

When a sports story makes the front page, it usually gets the best play. Just look at today’s St. Louis Post-Dispatch, which devoted half of Page One to the Cardinals’ baseball playoff loss. Of course, newspapers aren’t always so keen to promote defeat. The Indianapolis Star found a way to downplay the Colts’ loss in “Monday Night Football” by focusing on the positive. Go team!

You don’t have to tell the feisty local tabloid twice.

And don’t miss that dig at crosstown rival Boston Globe:

The Herald was the only Boston paper featured in the Top 10 list yesterday. The Herald’s front page was even tweeted out by Red Sox owner John W. Henry.

You know he’s gonna own the Globe too, right?

It doesn’t get much better than that for the Heraldniks.