What’s with the Boston Herald?

As the hardreading staff noted last month, the Herald resolutely refused to cover the Boston Globe’s Chernobylesque home delivery meltdown earlier this year. The Globe itself labeled it a “delivery debacle,” which we wrote “should be mother’s milk to the thirsty local tabloid but . . . nothing.”

Now comes the juicy memo from Globe editor Brian McGrory (first reported on Thursday in the redoubtable Dan Kennedy’s Media Nation) announcing a “no-sacred-cows analysis of our newsroom and what the Globe should look like in the future.”

McGrory framed it this way: “If a wealthy individual [who, presumably, is not John Henry] was to give us funding to launch a news organization designed to take on The Boston Globe, what would it look like?”

Regardless, don’t you want to hear the flamey local tabloid’s answer to that question? But over the past few days the Heraldniks have given us . . . bupkis.

Some speculate that the Herald has been laying off the Globe because the Globe prints the Herald. But that deal’s been in effect for three years and didn’t keep Herald columnist Howie Carr from lambasting the Globe for its Tsarnaev brothers coverage.

So why is the feisty local tabloid AWOL now?

She’s hot on the heels of the hot sports “contest” website DraftKings, which has spent $81 million on TV spots in the past six weeks, according to the Wall Street Journal. But that’s not keeping Healey from nickel-and-diming the DraftKingpins. She’s investigating whether the so-called fantasy sports site is actually a betting scheme in sheep’s clothing. And, as per usual, the Boston dailies see her quest quite differently.

The Boston Globe plays it straight with a C1 piece below the fold. 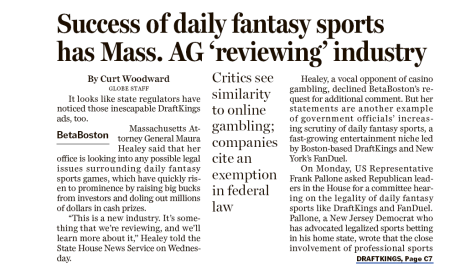 Crosstown at the Boston Herald, the story gets the expensive two-page spread. 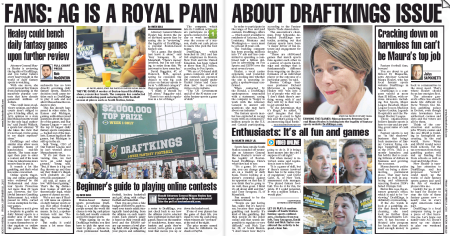 The punting local tabloid looks at the AG’s overreach from the fantasy fan’s point of view Owen Boss’s report, the legal perspective in Bob McGovern’s column,  and a John Sapochetti piece representing the umbrage-industrial complex.

And we’re betting we haven’t heard the last of this from the Heraldniks either.

Well, not exactly that specifically, but still . . .

As you splendid readers might remember (c’mon, it was only yesterday), the hardreading staff couldn’t help but note the fuddy local tabloid’s tut-tutting about Gov. Charlie Baker’s St. Patrick’s Day skit lampooning the MBTA (Maybe Better Tomorrow, Alright?) and its snow woes.

Today, Herald columnist Joe Fitzgerald essentially told his bosses to put a sock in it.

Listen to Charlie and just lighten up, everybody 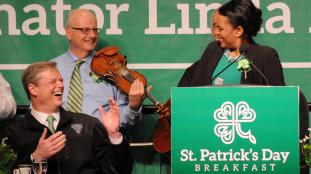 Charlie Baker, this one’s for you.

If you saw yesterday’s Herald, you read of the governor’s give-me-a-break response to knee-jerk critics who charged he should not have made lighthearted references to dysfunction at the T three days ago at the St. Patrick’s Day breakfast in Southie.

“If you can’t poke fun at yourself,” he scoffed, “you’re not getting it.”

Too often the jokes on Beacon Hill are on us, which is what made Baker’s slapstick such a breath of fresh air.

As opposed, presumably, to all the hot air coming from the umbrage-industrial complex.

Let’s just hope Fitzgerald got the last word on this idiotic riff. We’re pretty sure the Heraldniks can come up with a different idiotic riff without too much trouble.

Boston Herald – Once Again – at a DisADvantage

More ad-versity for the Boston Herald: Yesterday it was bypassed by two advertisers who took out full pages in the Boston Globe. 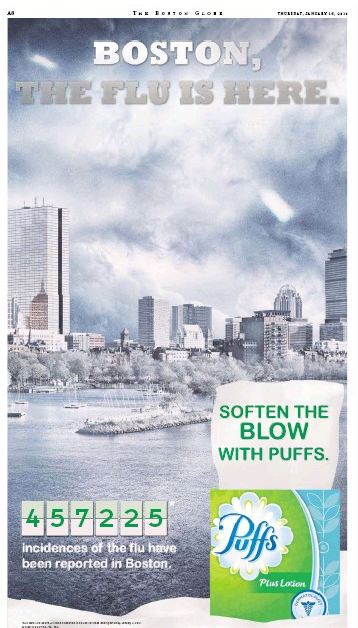 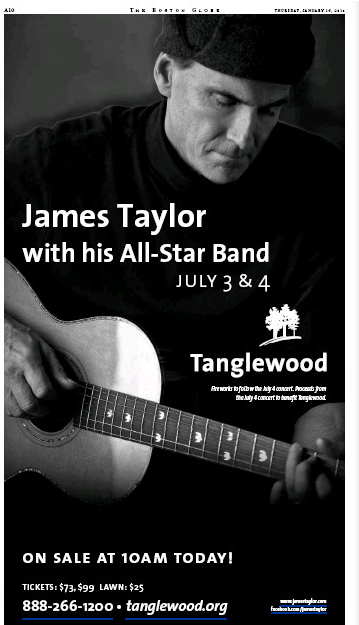 Neither ran in the funky local tabloid.

From our One Town, Two Different Places desk 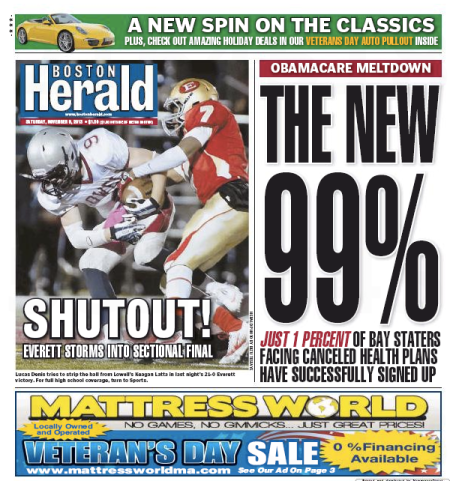 Mass. health care sign-ups lag among those forced to switch 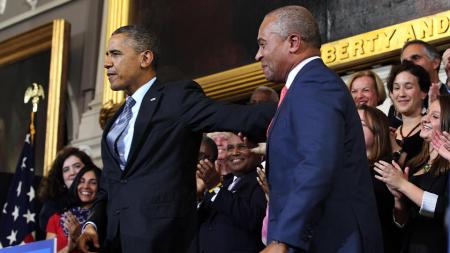 Massachusetts Health Connector officials told the Herald that only 549 applicants — out of the 150,000 Bay Staters forced to switch their health plans to comply with Obamacare rules — are poised to receive insurance through the new system.

And we know how much the Herald loves semantics issues, being so fastidious about details and all.

The Globe, for its part, is more like oblivious. From today’s page B1:

The Obama administration issued rules Friday requiring most health insurers to provide similar coverage for people with mental and physical health problems, even as Massachusetts regulators pushed insurers this week to show that they are already complying with the spirit of the law.

The day marked a milestone for mental health advocates across the country who have been waiting five years since President George W. Bush signed the mental health parity law for its patient protections to go into effect.

“This final rule breaks down barriers that stand in the way of treatment and recovery services for millions of Americans,” Health and Human Services Secretary Kathleen Sebelius said in a press release.

Not a word about healthcare signup problems for Massachusetts residents. On the other hand, though, “Massachusetts is seen as further ahead than many states in providing access to mental health care.”

That’s good news for the Heraldniks, because Obamacare’s driving them crazy.

Well the halfreading staff just got another call from the Heraldniks (rhymes with nudniks) who told us yes, we would not get the Boston Herald delivered to our home today. We should get it tomorrow, though. 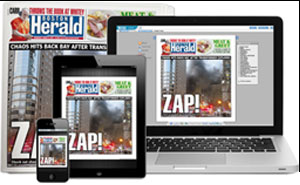 But good news! As subscribers we have free access to the fusty local tabloid’s E-Edition.

Hey, tell us something we don’t know. As the splendid readers of Two-Daily Town are likely aware, we often find the digital version of the Herald useful.

But – news flash! – we take the paper because we prefer reading it in print form.

Today’s Boston Herald has a swell time patting itself on the back for yet another mention by “Journalism’s own hall of fame” – that would be The Newseum – in its daily Top Ten Front Pages feature.

Under the headline “Sports Stories” there’s this:

When a sports story makes the front page, it usually gets the best play. Just look at today’s St. Louis Post-Dispatch, which devoted half of Page One to the Cardinals’ baseball playoff loss. Of course, newspapers aren’t always so keen to promote defeat. The Indianapolis Star found a way to downplay the Colts’ loss in “Monday Night Football” by focusing on the positive. Go team!

You don’t have to tell the feisty local tabloid twice. 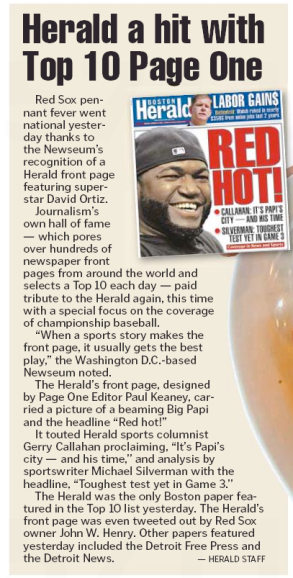 And don’t miss that dig at crosstown rival Boston Globe:

The Herald was the only Boston paper featured in the Top 10 list yesterday. The Herald’s front page was even tweeted out by Red Sox owner John W. Henry.

You know he’s gonna own the Globe too, right?

It doesn’t get much better than that for the Heraldniks.

The Boston Herald has long been a self-promotion machine, touting some coverage that led to government action or crowing about its inclusion in the Newseum’s Top Ten Front Pages on a particular day.

But not today, because that latter distinction belongs to crosstown rival Boston Globe.

As the Northeast braces for a potential blizzard for the ages, front pages in that region are doing the same and preparing readers for the impact. AM New York offers a “Blizzard Survival Guide.” “Bracing for a big one,” The Boston Globe warns. Are newspapers still relevant? In times like these, they’re just as essential as milk, batteries, water and toilet paper.

The stately local broadsheet’s Page One: 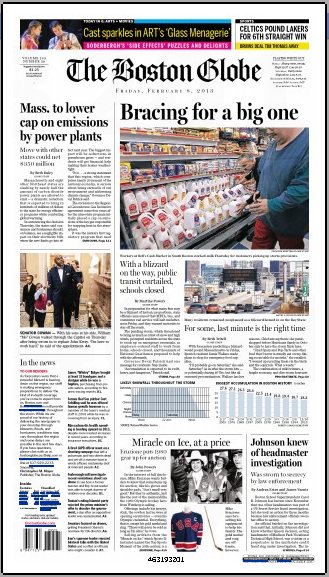 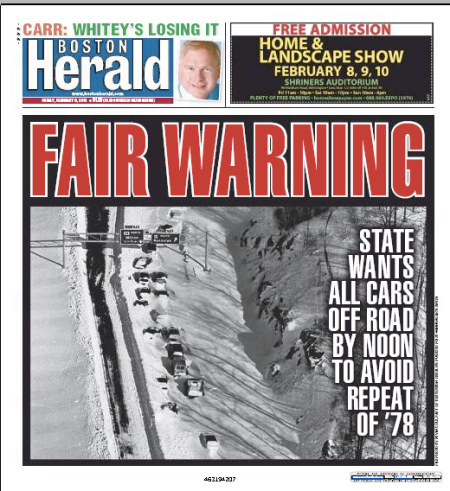 Hey – win some, lose some. But the beauty of the daily bakeoff is, there’s always tomorrow.