Well the hardreading staff was perusing the Sunday papers yesterday when we came across a startling sartorial item in the Boston Globe’s Names column, which actually recycled the story so we’ll reference Kevin Slane’s original piece on Boston.com.

A local TV station just got a new dress code

If you’ve been watching NECN recently, you may have noticed something missing. Male anchors in the studio have done away with the tie, a longtime staple of business attire.

The new dress code, implemented by NECN news director Ben Dobson, officially went into effect last week. Other NBC-owned stations in the region, including NBC10 Boston and Telemundo, plan to adopt the tie-less look, too.

“Dobson said the move to ditch the neckwear is an effort to mirror its viewers, whom he believes are less likely to wear ties on a daily basis thanks to evolving workplace dress codes.”

Seriously? So maybe doctors should wear jeans and Patriots jerseys? Or lawyers could wear Lululemon to court? What the hell.

Back in the 1920s and ’30s, the BBC made radio announcers wear dinner jackets. In the U.S. at that time, announcers and performers wore tuxedos and gowns. It was a sign of respect for the listeners, even though they couldn’t see the broadcasters.

But that’s so old school. It’s clearly better to be personable than professional now, according to Audrey Mansfield, visual stylist for NBC-owned stations. She told Slane, “On set, they’ll still be wearing a nice shirt and full suit. They’ll still have a very nice collar, and be very well-groomed. It is one piece of clothing we are taking away.”

Except it’s more than just a necktie. At least to some of us old fogies.

As you splendid readers might – or might not – have noticed, former Boston Globe Names stalwarts Mark Shanahan and Meredith Goldstein were deleted from the sort-of gossip column several months ago. Last known sighting was June 18.

After that, the column had this stripped-down look. 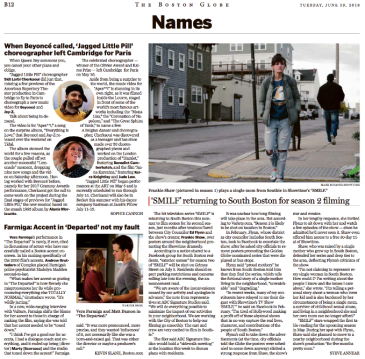 Until yesterday, that is, when Names got a bit of a facelift. 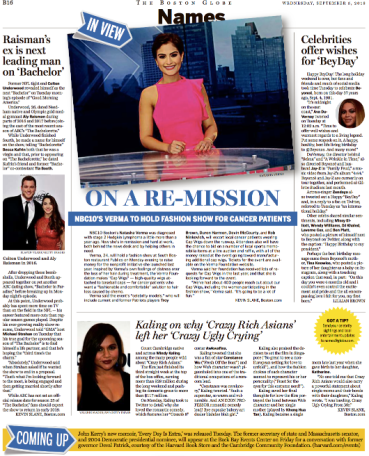 Most of the content has been outsourced to Boston.com writers, chief among them Kevin Slane. Nice chance to make a name for himself.

Meanwhile, memo to Boston Herald Track Gal Olivia Vanni: Now’s the time to hit up your bosses for a fall makeover, no?

The hardreading staff has a serious beef with the Boston Globe’s Names column, as we noted in a recent post.

We also noted that neither Boston daily had reported on Carr’s quantum leap in social status, ending yesterday’s post this way: “Hey – you Namesniks at the Globe: Wanna grab a piece of this?”

Apparently they did, since this appears under Mark Shanahan’s byline in today’s snakey local broadsheet.

Conservative talk-show host Howie Carr fancies himself a man of the people, albeit one who went to an exclusive prep school (Deefield Academy), attended a fine liberal arts college (University of North Carolina), and resides in a wealthy Boston enclave (Wellesley). So it should be no surprise that, like any other average Joe, Carr has become a newly-minted member of the Mar-a-Lago Club, President Trump’s posh Palm Beach, Fla., retreat.

That, not surprisingly, went over like the metric system here at the Global Worldwide Headquarters. But, hey, that’s show biz.

Then again . . . we did seem to tap into some basic sense of decency in the Namesniks, as yesterday’s column featured something new (at least as far as we can tell) – honest to God attribution.

Of course, that does nothing for the hardbleeding staff.

But we’re happy to take one for the team.