In an apparent attempt to demonstrate that they’re not sore losers, the LA ball team bought page 3 of today’s Boston Globe to run this ad. 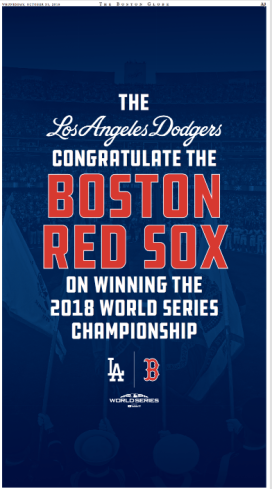 The sure loser? The Boston Herald. Dem Bums gave the thirsty local tabloid an intentional pass.

And it wasn’t just LA that gave the Herald the air. The island of Aruba also ran a Globe-only ad today.

The tagline: One Happy Island.

Boston Herald for Sale, Price Is Right for Globe

When the costly local tabloid arrived at the Global Worldwide Headquarters this morning, the front page of Sunday Sports blared out this:

save Sale for Game 5

Except . . . this Peter Abraham piece is more like it. 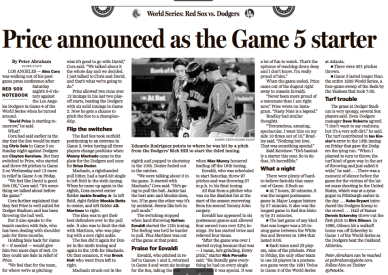 To be sure, the Herald got it all sorted out eventually, as the paper’s website and E-Edition indicate. But that sure doesn’t help the lowly home subscriber, now does it?

Vin Scully, the legendary 85-year-old broadcaster who has called Los Angeles Dodgers games for lo, these last 64 years, has just re-upped for 2014, and the Boston Globe’s Dan Shaughnessy paid tribute to him in Sunday’s edition.

Vin Scully simply the best broadcaster of all time

The best who ever lived.

On Friday, the Dodgers announced that Scully will be back as team broadcaster for his 65th year in 2014. A humbled Scully, now 85, gracefully participated in a press conference, telling the assembled media that he wished the Dodgers had simply released the news with a single line in the evening’s game notes.

The Sunday Boston Herald had nothing.

Its rare that the Boston Globe and Boston Herald feature the same story on Page One (the Herald, with a minuscule home-subscription base, designs its front page to maximize newsstand sales; the Globe, whose circulation is largely home-delivered, doesn’t bear that burden).

But today is an exception, proving that the current Red Sox squad is a uniter, not a divider. They’ve united the town in dislike for them. 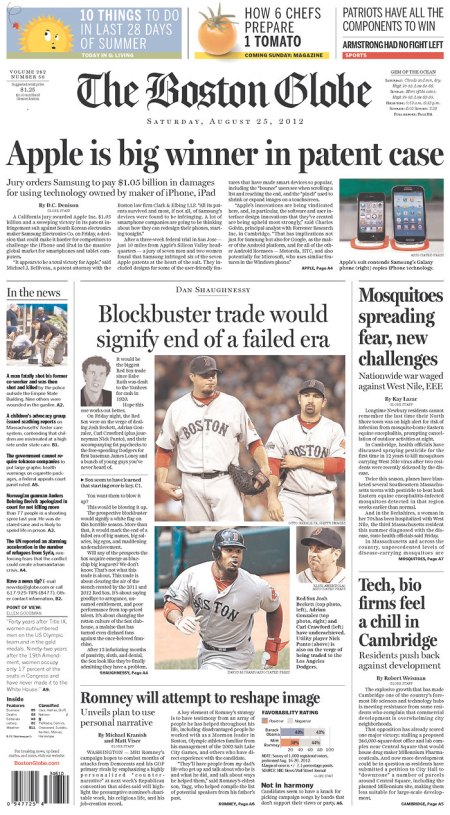 Advantage: The Herald, hands down.

Now to the battle of the headlines.

Red Sox on the verge of a trade that would send Beckett, Gonzalez, and Crawford to Dodgers

Sox poised to blow it all up, start anew

And finally, the all-important Number of Godfather References.

Whether or not the deal goes down, we now have beyond-a-shadow-of-a-doubt proof that Red Sox general manager Ben Cherington is prepared to make like Michael Corleone taking out the heads of the other four families in his own clubhouse.

At post time, both papers had announced the completed deal on their websites. The Herald (around 10 am) seemed to beat the Globe (12:29) by a good couple of hours.