Most of you splendid readers know the story of Yarmouth police Sgt. Sean Gannon, who was killed last month serving an arrest warrant in Marston Mills.

Today’s Boston Herald features an update in which Jordan Frias reports on “detailed information about the moments leading up to the shooting death of Yarmouth K-9 Sgt. Sean Gannon and the surrender of his alleged shooter Thomas Latanowich.” The new details come from Cape and Islands District Attorney Michael O’Keefe’s office. 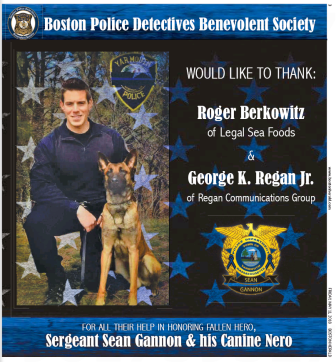 Interestingly, the ad did not run in the Boston Globe, which presumably was no less sympathetic to the fallen officer than the Herald was.

Regardless, the hardsearching staff was unable to find any connection between Sgt. Gannon and Roger Berkowitz or George Regan. So we contacted the Boston Police Detectives Benevolent Society for enlightenment. We’re still waiting for an answer but we will, as always, keep you posted.

If It Isn’t Dreck, It Isn’t Legal

As our kissin’ cousins at Campaign Outsider have noted, virtually every ad campaign for Legal Sea Foods over the past several years has been equal parts puerile and unfunny. But the current Berkowitz for President effort stands out for its excessively bad taste.

Back in March, there was this ad that drew protests from numerous quarters. 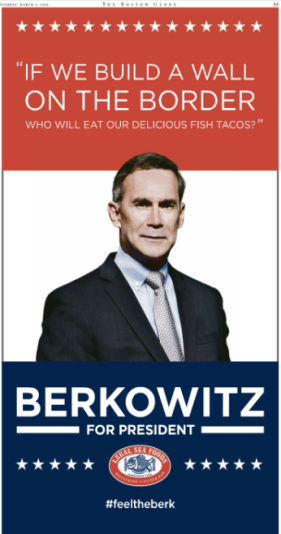 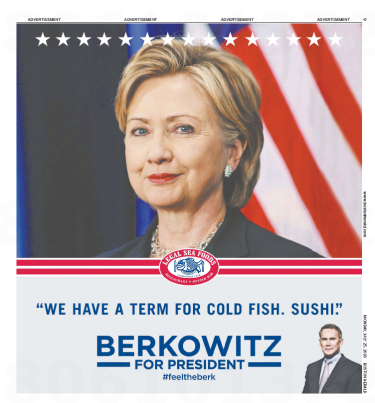 Note that once again the Boston Herald has marked this “Advertisement,” and once again the Globe has not. Who ever imagined the thirsty local tabloid would be more fastidious than the $tately local broadsheet?

Regardless, Roger Berkowitz is getting hustled by his fancy-pants New York ad agency, DeVito/Verdi. In this case, he’s the fish.

Legal Sea Foods Is Getting Scrod by Its Ad Agency

As the hardreading staff has noted, ever since Roger Berkowitz hired New York ad agency DeVito/Verdi, Legal Sea Food’s advertising has largely been in bad taste – a little bit flashy, a little bit trashy. (Our kissin’ cousins at Campaign Outsider have noted the same.)

Back in March DeVito came up with the breakthrough concept of having Berkowitz run for president, employing the theme Feel the Berk. (Sure, lots of ads have featured fake political campaigns, but none of them involved Berkowitz.) 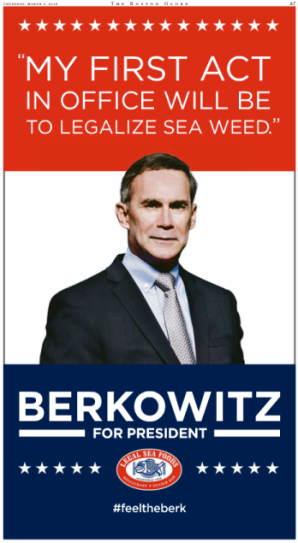 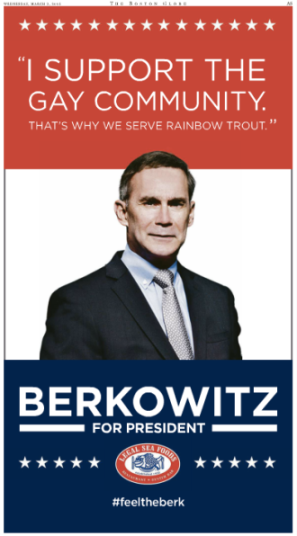 Today came the latest installment, which ran in both Boston dailies. 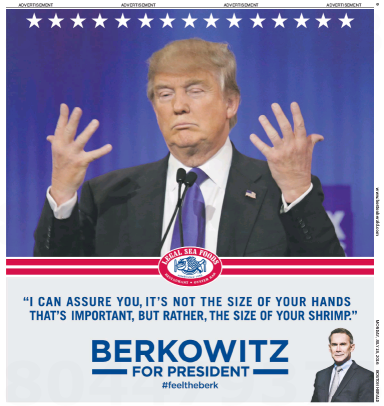 Interestingly, the Herald ad (above) is labeled “Advertisement” – four times – while the Globe version is unlabeled. That says something about either the Herald editors or the paper’s readers. Or, possibly, both.

Regardless, one more piece of carp from the local fish house chain.

If It Isn’t Frosh, It Isn’t Legal

As the hardworking staff at our kissing’ cousin Campaign Outsider has dutifully noted, Legal Sea Foods owner Roger Brokowitz – sorry, Berkowitz – is pretty much as tasteless as his menu when it comes to advertising his fish houses.

Exhibit Umpteen: The latest Legal Sea Foods ad campaign, which enjoyed some Boston Globe $ynergy on Tuesday, and featured this full-page ad in the $tately local broadsheet on Wednesday. 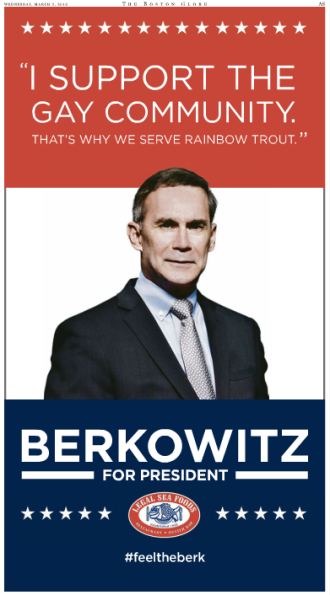 The ad in today’s edition of the Globe is downright dumb. 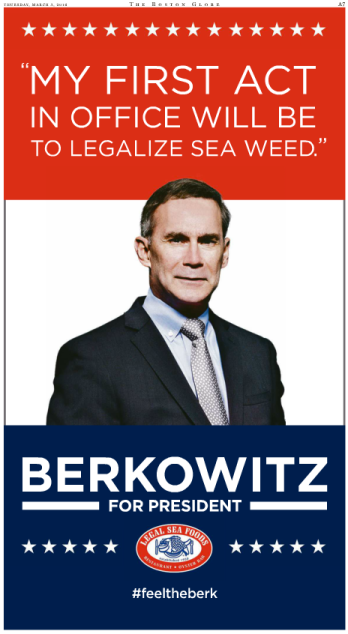 Even dopier are the campaign’s TV spots (see them here), which don’t even rise to the level of sophomoric.

For several years now Berkowitz has relied on trendy New York ad agency DeVito/Verdi to create his advertising, which has drawn widespread criticism.

Maybe it’s time for him to cast his net closer to home.

P.S. Unsurprisingly, the Legal ads have not run in the irony-deficient Boston Herald. Apparently, the readers of the thirsty local tabloid fail to #feelthejerk, er, berk.

As the hardreading staff has repeatedly noted, the Boston Globe has gotten awfully cozy with its advertisers of late.

The entrée was this full-page ad on page A5: 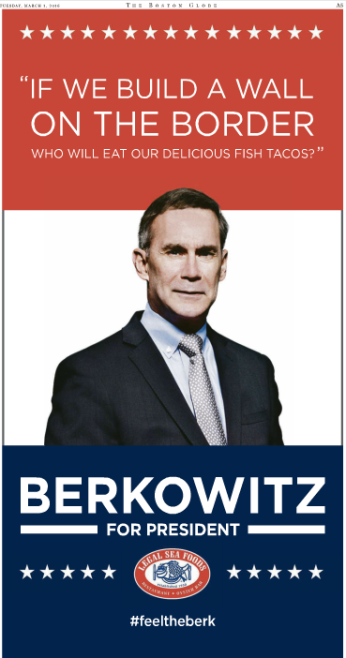 Roger Berkowitz: All politics is Legal

That’s right. The Boston restaurateur known for his wacky advertisements is at it again. A new round of Legal Sea Foods ads will appear on Tuesday on local news stations and in the Globe, promoting “Berkowitz for President.”