Think of it as a behind-the-bar brawl.

As the hardreading staff has previously noted, the Total Wine chain of liquor stores has dropped a bundle over the past two years on full-page ads in the Boston Globe, sometimes cheek-by-jowl with critical coverage of the retailer’s attempts to change state alcohol rules nationwide to work more in the chain’s favor.

(For a lively debate in this space about whether the Globe should have disclosed its financial connection to Total Wine in those news reports, see here.)

Regardless, Total Wine had pretty much the run of the stately local broadsheet until last Thursday, when this ad appeared on page A16.

Something all serious winemakers and distillers have in common is great pride in their work. Read the label – they’re very eager to tell you all about their history, their traditions, their culture. Oh, it’s not on there? Maybe

you’re looking at one of Total Wine’s private-label “house brands” from an unidentified source.

At New Hampshire Liquor & Wine Outlets, you will find brands you know and trust at everyday low prices.

This being Boston, we expected a serious smashmouth response, but here’s what appeared on page A3 of yesterday’s Globe.

That’s all you got, Total Wine?

As the splendid readers of Two-Daily Town might remember, the hardreading staff is one of 17 home subscribers (a.k.a. The Few. The Proud. The Idiots) the Boston Herald boasts.

Consequently, here’s the front page of the fusty local tabloid that hit our porch this morning (tip o’ the pixel to the Missus). 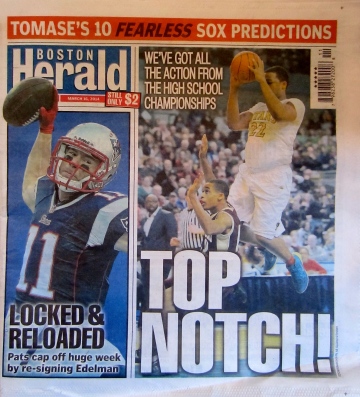 Right: All sports, all the time.

By contrast, here’s the front page of today’s Boston Globe. 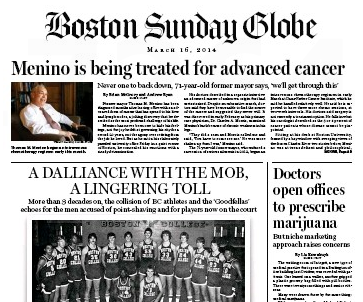 A later edition of the Herald did feature this front page, but the corn was off the cob by then. 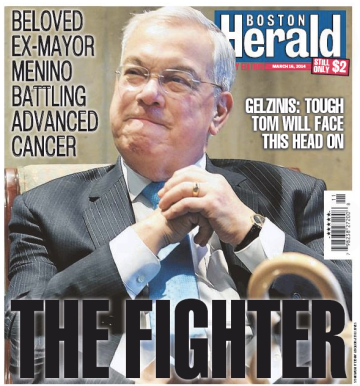 We can’t wait until the Globe starts printing its papers  – and the Herald’s – in Millbury (see Dan Kennedy’s piece here). At that point the Sunday Herald will likely roll off the presses sometime Friday afternoon.

What Can the Herald Do for Brown? (Looking Like ‘No’ Hampshire Edition)

Tough sledding for Scott Brown (R-Elsewhere) in the feisty local tabloid today: No snow (and yes, I’m looking’ at you, Marv).

The Brownout starts right off on Page One. (And a warm Two-Daily Town welcome to our first Inexplicable Little Green Three!) 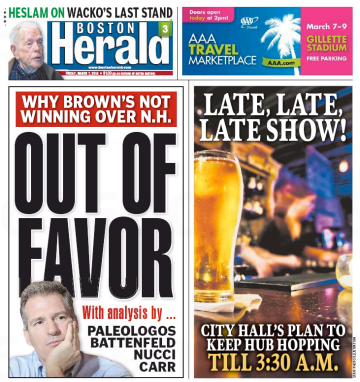 From there, it’s on to the low-priced spread inside. 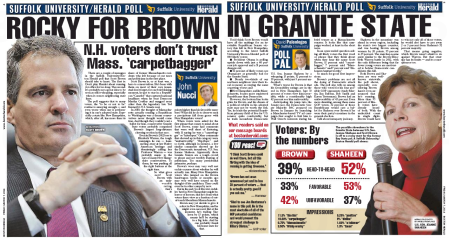 You’ve got some knee-buckling poll numbers from David Paleologos there, along with long-face analysis from John Nucci. (On the next page Howie Carr does some whistling past the graveyard for good measure.)

All in all, not the best press day for Downturn Scottie.

Well, more like shaker-upper if you want to get technical about it.

The feisty local tabloid has a new host for Press Party, its weekly media-review webcast, along with a streamlined panel.

As for the content of the webcast, we’ll leave that to the hardreading staff at Campaign Outsider.

Meanwhile, in other Herald web news, a splendid reader of Two-Daily Town sent this today:

Have you noticed that they’ve cut the 6 to 9 a.m. slot [on Boston Herald Radio]? If you turn to the radio page in the paper, you’ll see there’s nothing listed. I listened this morning for a bit between 6 and 6:30 and heard an unbelievably lame segment from yesterday’s sports show followed by the beginning of Graham’s Thursday show. 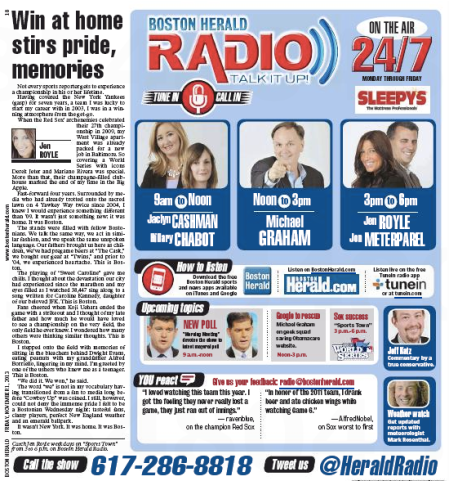 The rumor mill also has Battenfeld taking over the vacated 6 to 9 slot.

The hardreading staff is, as you may have gathered, an eternal optimist. But this piece in Thursday’s Boston Globe gives us pause.

Cahill said the BRA is attempting to “give away rights to a public street without reasonable public notice, without public advertisement, and without utilizing a public process.” There were no public hearings about the deal, though the board will vote during a public meeting.

Cahill also said the city should not sign a lifetime contract with the Red Sox and should seek a slice of the revenue generated by the team’s use of Yawkey and Lansdowne — a total of about $4.5 million annually, according to the team.

The problem here isn’t the Globe story – reporter Callum Borchers does a perfectly reasonable job of examining both sides of the issue. The problem is, nowhere does the Globe disclose that Red Sox principal owner John Henry is the boss of them – something the Globe should absolutely overdisclose.

Crosstown, the Boston Herald is less, shall we say, nuanced.

Boston Mayor Thomas M. Menino balked yesterday at intervening in a proposed $7.3 million deal between the BRA and the Red Sox for air rights over Lansdowne Street and game-day concessions on Yawkey Way as the state Inspector General’s office said it would review the deal and an independent watchdog group called it “financially irresponsible”

“Why should I?” Menino asked. “It’s a good deal. (The Boston Redevelopment Authority) got much more money than they got in the past. Think about what the Red Sox mean to the city: jobs, taxes, vitality, heads on beds.”

The Herald piece doesn’t mention the Globe’s opaque coverage of the story.

Not sure that will be the case for long.

The Globe proceeded to devote another page-and-a-half to tracking Dookhan defendants freed by the crime lab debacle. 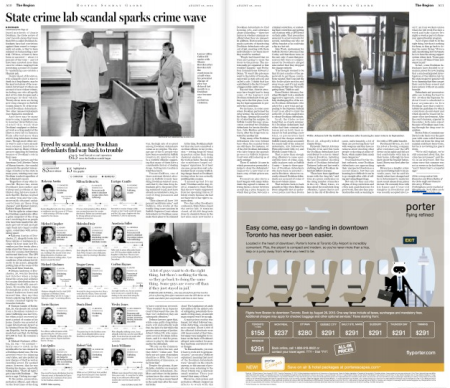 Meanwhile, Sunday’s Boston Herald did what the feisty local tabloid always does: Inflate the personal into the political. 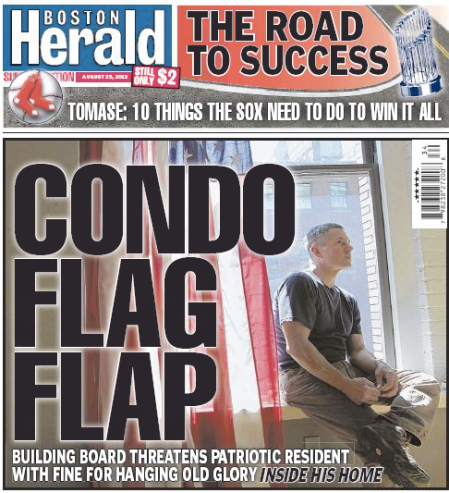 That’s certainly newsworthy in its own right, but what the Herald will never admit is that the Globe story will be its assignment desk all this week.

That’s the Two-Daily Town two-step in a nutshell.

Is the Herald’s Jerry Holbert Clipping the Globe’s Dan Wasserman?

First off, let’s stipulate – as they say on Law & Order – that Boston is lucky to be not only a Two-Daily Town, but also a Two-Editorial-Cartoonist Town.

Both of whom, as the hardreading staff noted recently, have waded into the Anthony Weiner rumpus down in the Big Town. 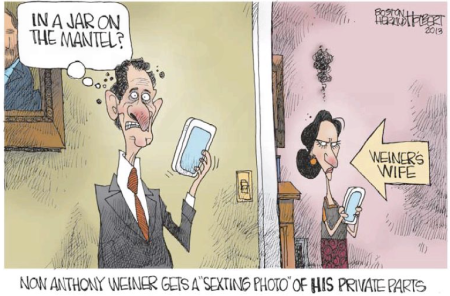 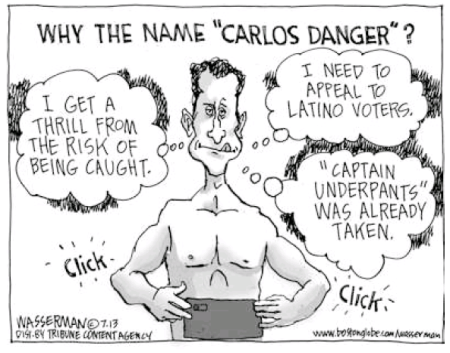 To be clear: We’re not accusing anyone of anything.

The hardlyreading staff went out earlier today to find some actual newspapers – and we actually did. As we carried them triumphantly back to the Two-Daily Town Global Worldwide Headquarters, we discovered inside the front door – newspapers!

The Sunday papers. And Saturday’s papers. Big shoutout to our delivery guy.

Result: An embarrassment of dailies.

As we plowed through the weekend’s storm coverage, one topic stood out: Gov. Deval Patrick’s “extraordinary step,” as Saturday’s Boston Globe dubbed it, that banned driving during the storm.

From the stately local broadsheet:

Travel ban surprises many, pleases some

Some criticized the governor for his last-minute edict and the stiff penalties it carried — up to a year in jail and a $500 fine to any nonemergency personnel on the road after 4 p.m. — while others doubted that storm-swamped police would have time to enforce the ban.

But those who recalled the nightmare highway strandings in the Blizzard of ’78 praised Patrick’s order — including the former governor who wished he’d taken similar action sooner 35 years ago.

“There’s no question that the governor’s doing exactly the right thing — have people home, get them off the streets, and just cool it,” said former Massachusetts governor Michael Dukakis, speaking from Southern California, where he now teaches at UCLA. [Where it rarely snows, not to get technical about it.]

Others, however, called the ban “tyrannical.” Crosstown at the Boston Herald, it was “absolutely draconian,” according to one local cabbie. But Herald columnist Joe Battenfeld disagreed:

Patrick does it right

You can’t blame Gov. Deval Patrick for not wanting to pull a Michael Dukakis.

In the blizzard of 1978, the state was woefully unprepared for the massive storm. Gov. Dukakis did issue a travel ban but it came too late — after dozens died and thousands were stranded on the roads.

So now Patrick tries to prevent deaths by banning cars on the road and he gets trashed by critics who say it’s an example of government gone too far.

Can you imagine the outrage if Patrick had done nothing and the blizzard ends up claiming lives?

That, of course, is nothing compared to the outrage of fellow columnist Howie Carr for the inconvenience Patrick cost him.

Hey Gov. Patrick, didn’t your mother ever teach you about the magic word “please”?

You know, you’d ask her for something, and she’d say, “What’s the magic word, Deval?”

I guess she didn’t because I didn’t hear it Friday, when you ordered everyone in the state off the roads at 4 p.m. Like everyone else, I did hear about the $500 fine and/or one year in jail for violating your order, which you had said the previous day you probably weren’t going to issue.

Carr proceeds to take a predictable swipe at “the bow-tied bumkissers . . .  already falling all over themselves lauding you for your ‘wise’ decision to shut down business statewide and arrest anybody who had the audacity to try to get home from work.” (So Joe Battenfeld is a “bow-tied bumkisser,” Howie?)

But then Carr gets at the real pathos of the travel ban:

Myself, I’d hired a guy to drive me home Friday night. I was going to leave my car warm and safe in a garage in Brighton. But then he heard about the year in jail, and he chickened out.

So I called Veterans Taxi. At 5 p.m., Veterans called back and said the cops had just ordered them off the road. In other towns, the police were doing robo-calls, a chance to throw their weight around, too.

I wasn’t that worried driving home. I had press credentials, and if any cops had stopped me, I figured I would just tell them I was Police Commissioner Edward F. Davis’ son.

There’s your man of the people, Herald readers, whining that “now my car is in the driveway, totally buried in snow.”