It’s been a long, dry summer for the Boston Herald in terms of Market Basket advertising. From the very start of the Demoulas Slapfight/Market Basket Rumpus, the beleaguered supermarket chain has relentlessly bypassed the thirsty local tabloid, choosing time and again to run ads only in the Boston Globe.

It actually started last summer, when the Employees & Management of Demoulas/Market Basket ran this full page in the Globe: 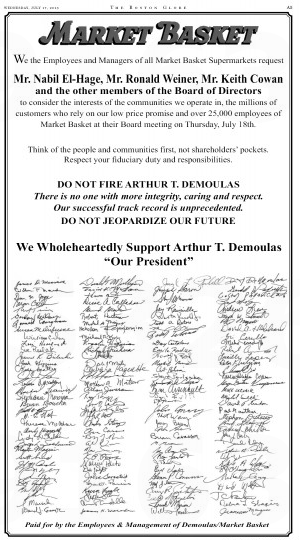 Then, facing an employee/customer revolt this summer because the board of directors had ignored the ad above and fired Arthur T., the new Market Basket CEOs ran this ad, also exclusive to the Globe: 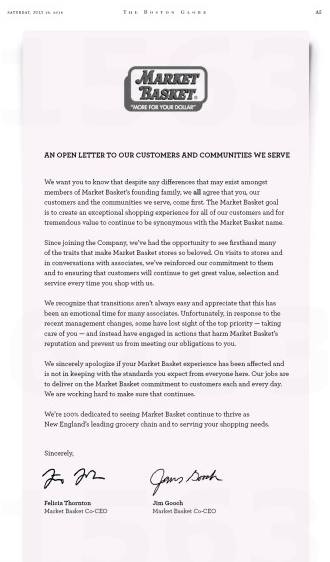 That plea, of course, fell on deaf ears, so the increasing desperate Arthur S. forces resorted to this full-page Help Wanted ad – again, just in the stately local broadsheet:

(The two-page spread also ran in the Globe but why get technical about it.)

Why else would he refuse to hire Boston Herald readers?

(There’s plenty of news coverage of the latest developments in the Demoulas Slapfight/Market Basket Rumpus here.)

Crosstown at the feisty local tabloid, the only appearance of the ad was in this news report.

Market Basket is running ads today seeking directors and assistant directors for its stores, and accountants, accounts payable/receivable associates, and grocery and perishable buyers in Tewksbury and Andover. The fairs are open to employees seeking new positions and the public.

Market Basket is running ads (note the plural), just not in the Herald. So Market Basket does not want to hire Herald readers? That just seems wrong.

The thirsty local tabloid did, however, get a consolation prize – this ad from an alphabet-soup coalition attacking Hamas.

Even that was bittersweet, though. As the hardreading staff noted, the Globe had the ad a week ago.

As the hardreading staff noted earlier, yesterday’s Boston Herald got the better of the Globe in the Boston dailies’ coverage of the Demoulas Slapfight/Market Basket Rumpus. But today, the stately local broadsheet was on the story like Brown on Williamson, with four – count ’em, four – pieces on the grocery-store equivalent of mutually assured destruction.

Start, of course, with Page One (the Globe ePaper is Lost in Cyberspace right now, so no screenshots for you!).

Negotiations over the fate of the embattled Market Basket grocery chain stretched into a second day Tuesday, as the company’s board said the owners were evaluating a sale to help rescue the multibillion-dollar business.

As analysts warn that the value of the company falls and the threat to workers’ jobs rises with each day of indecision, the board said it was still considering offers by ousted president Arthur T. Demoulas and other suitors. People familiar with the talks said Demoulas’s offer was the focus of discussions throughout the day.

And Market Basket is the focus of the Globe throughout today’s paper. Drifting back to the Business section we find Shirley Leung’s column about other grocery families that struggled with ownership, Jack Newsham’s piece on Market Basket loyalists shopping at the competition, and a look at social media by Callum Borchers and Andrew Ba Tran, complete with nifty graphic.

It should be no surprise that in the digital age Facebook has served as the center of the Market Basket protest movement. But just a few short weeks ago, many of the employees leading the fight barely knew their way around the Internet.

Until recently Market Basket didn’t have an official company website. It quickly crashed and is still not working. Managers have company e-mail accounts but use them sparingly. When you work in a supermarket, the colleague you need to talk to is never more than a few aisles away.

“Technology is not part of our company culture,” acknowledged Tom Gordon, who was a a grocery supervisor at market basket for 39 years before being fired in early July for helping organize the protest. “I’m still using my flip phone, if that’s any indication.

Yet a Facebook page called Save Market Basket has become the hub where workers lay out the next course of action to get their ousted president, Arthur. T. Demoulas reinstated, post news articles and letters from the company’s board of directors, and where tens of thousands of customers have pledged their support.

feels like there’s no bottom to this well, doesn’t it?

From our Late to the Party Poopers desk

The Boston Globe’s Page One piece:

Pressure mounts on Market Basket board of directors

With a multibillion-dollar supermarket empire hanging in the balance, the Market Basket board of directors met Monday to again consider a buyout offer from Arthur T. Demoulas but agreed only to continue negotiating, according to a person briefed on the discussions.

Demoulas had previously set the end of Monday as the deadline for rival members of his family to respond to his offer to buy their half of the company. The board’s continued negotiations will keep Demoulas’s bid on the table for now, according to the person familiar with the discussions, but both sides are facing pressure to resolve the family feud that has paralyzed the 71-store chain and caused tens of millions of dollars in losses.

Among those pressures: a total revolt by Market Basket store managers.

Meanwhile, managers of some stores signed a petition stating that they would resign unless Arthur T. Demoulas is reinstated as president of Market Basket or if the company is sold to an outside buyer. It was unclear how many managers had signed the petition Monday night.

Excuse us – it was not unclear to the Boston Herald.

Market Basket managers have reaffirmed their commitment to working for nobody else but fired CEO Arthur T. Demoulas, saying they’ll quit if he isn’t reinstated — a threat that could remove the working management of most of the chain’s stores, already reeling from a loss of customers and protests by thousands of workers.

Managers and assistant managers from 68 of the Tewksbury chain’s 71 stores had signed a petition by yesterday evening stating they would resign immediately if Demoulas isn’t reinstated “with full authority” or another buyer other than Demoulas purchases the company, according to Steve Paulenka, a former Market Basket facilities and operations supervisor who was fired July 20 for helping spearhead employee protests and job walk-offs.

So who’s doing a better job of bagging this story?

The endless Demoulas Family/Market Basket rumpus will no doubt have its own A&E reality program (Grocery!) eventually, but for now it’s playing out mostly in the local dailies.

Saturday’s installment featured this Page One piece in the Boston Globe.

Workers stand up for ousted Demoulas

TEWKSBURY — They left their jobs as butchers and baggers, cashiers and clerks, and came from Rochester, N.H., Fitchburg, Raynham, and Milford for a noisy show of worker solidarity against company bosses they distrust.

In an unusual sign of unity and devotion, more than 2,000 supporters of ousted Demoulas Market Basket chief executive Arthur T. Demoulas gathered outside the chain’s headquarters Friday to demand his return to the top of the family supermarket empire.

They carried colorful signs and cheered speeches against corporate greed, all the while risking being fired for skipping work to attend the protest.

“We do this every day until he comes back,” Tom Trainor, a longtime Market Basket supervisor, said of the employee protests on behalf of Demoulas, who was fired in late June by a board controlled by his chief rival and cousin, Arthur S. Demoulas.

And there might be more axing to come judging by this full-page ad in yesterday’s Globe:

There had yet to be fallout last night for Market Basket employees who ditched work yesterday to rally for the reinstatement of the grocery chain’s fired CEO even as their own jobs were on the line.

An estimated 2,500 to 3,000 Market Basket employees and others showed up at the company’s Tewksbury headquarters yesterday to show support for former CEO Arthur T. Demoulas, fired last month by a board aligned with his rival cousin and shareholder, Arthur S. Demoulas.

The above appeared on page 13, which likely has nothing to do with the unfortunate (for the Herald) fact that the Market Basket ad did not run in the feisty local tabloid.

But hope springs eternal for the Sunday Boston Herald, yeah?