The Fix Is In? No Love for Boston Herald in WashPost Top Political Reporters List

The most under-appreciated reporters in the political world are the scribes covering state and local politics. They rarely get the attention of their colleagues at the national level but are often covering the very politicians and national trends that come to impact the broad political landscape.

Every two years (or so), I like to honor these reporters with a look at the best of the best from each of the 50 states plus the District of Columbia. The list below was built almost entirely on recommendations from the Fix community — here on the blog, on Twitter at #fixreporters and on Facebook. A few of my personal favorites are included as well.

Skim down about halfway and here’s what you find:

Conspicuous by its absence? That’s right – the Herald. Granted, this was a beauty pageant judged by political junkies who gravitate toward the Washington Post, but it’s unlikely ideology was the driving force here. It just might be that people fail to take the flighty local tabloid seriously anymore.

As for us, we don’t know Jim Hand’s work, but there’s no one here we’d pull to plug a Heraldnik into the mix. They just don’t really belong. Then again, that’s pretty much how they like it.

The coup de grâce came, fittingly, on Page One of today’s Boston Globe.

In a sudden shift from an announcement over the weekend, the domestic partner of presumptive Senate president Stanley C. Rosenberg abruptly resigned Monday from his position at a politically connected Boston communications firm.

Bryon Hefner, in an e-mailed statement to the Globe, blamed the newspaper for driving him out of his job working as a public relations staff member for Regan Communications.

Late Saturday the Regan firm, which offers potential clients Beacon Hill connections and help with lobbying, had said it was reassigning Hefner from its Boston headquarters to its Florida office.

Hefner, who has been absolutely sandblasted by the stately local broadsheet for the past three weeks, wrote in his email to the paper, “The Boston Globe has rejected my transfer to Florida, identifying it as ‘not being far enough away’ if I am still in a relationship with my partner of over six years . . . The Boston Globe has forced me, just days before Christmas, to choose between my personal and professional life.’’

Globe reporter Frank Phillips, who (along with Jim O’Sullivan) has played Javert to Hefner’s Jean Valjean, wrote this in response:

It was not immediately clear what Hefner was referring to when he wrote that the newspaper had “rejected” the Florida move. Neither Hefner nor Rosenberg responded to requests for comment.

Not immediately clear? Probably never gonna be clear – because it’s most likely some crybaby concoction from a kid who got too big for his britches, as my old man used to say. (Here’s the Globe story on Regan’s dispatching of Hefner to Florida. No hint of it “not being far enough away,” so it’s still not clear where Hefner’s quotation marks came from. Unless the Globe is holding out on us.)

Regardless: Bryon, we hardly knew ye. But that was more than enough for most.

Is One Local Daily Baker Dozin’?

Today’s Boston dailies have two different views about GOP gubernatorial hopeful Charlie Baker’s campaign-finance prospects – one good, the other not so much.

The Boston Globe’s Frank Phillips has this story: 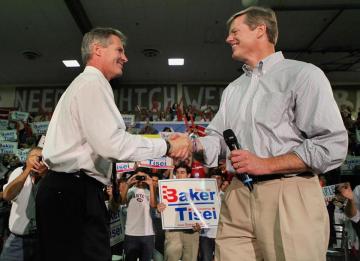 Scott Brown’s entrance into New Hampshire’s US Senate race has created a political and media firestorm that some analysts believe will damage critical underpinnings of Charlie Baker’s gubernatorial candidacy in Massachusetts.

Many of the state and national Republican resources that would have been showered on Baker’s race for governor — in terms of fund-raising, strategists, and manpower — will now be directed at Brown’s challenge to Senator Jeanne Shaheen.

Just as problematic for Baker is the huge amount of money that will pour into the Boston media market, aimed at southern New Hampshire, to boost Brown’s candidacy in what the national GOP and the Democrats see as a key battleground over control of the Senate . . .

That translates into several potential problems for Baker. Start with independent expenditure groups and party committees scooping up big chunks of commercial inventory on Boston TV stations, leaving less desirable slots for Baker. Then factor in the inevitable smashmouth nature of the spots on both sides of the Granite State bakeoff; some of the mud slung at Brown will surely land on Baker as well.

Then again, crosstown at the Boston Herald Two-Time Charlie’s prospects look much sunnier. Page One, lower half:

This one is Joe Battenfeld’s story:

May pour big $ into governor’s race

Two new Super PACs — one Democratic and one Republican — have jumped into the Massachusetts gubernatorial race, the latest sign that shadowy special

interest groups and power brokers will be pouring millions of dollars into the race for the Corner Office.

One of the Super PACs, called “Massachusetts Forward Together,” has a clear purpose — to “support the gubernatorial candidacy of Steve Grossman,” according to papers filed yesterday with the state’s campaign finance office. Grossman, the state treasurer, is a Democratic candidate for governor.

The other Super PAC, chaired by longtime Republican strategist Beth Lindstrom, appears to be an effort to support the candidacy of Republican gubernatorial candidate Charlie Baker. Neither of the organizations has reported spending any money yet.

Lindstrom’s PAC has the intentionally vague name of “Commonwealth Future” and its stated purpose is “to support candidates who create jobs, grow the Massachusetts economy and improve education,” according to its filing with the state.

But only if you read both dailies.

Lots of political prognostication in the local dailies today about who might do what in the race to fill the U.S. Senate seat about to be vacated by John Kerry (D-Am I Secretary of State Now?).

Start with the the Boston Herald, which turns half of Page One over to the prospects of Rep. Stephen (Peek-a-Boo) Lynch (via the Newseum’s Today’s Front Pages).

Lynch earns a split decision inside: Hillary Chabot’s piece has the headline, “Menino Shaping Up As Ace in Hole for Lynch,” while Joe Battenfeld’s column presents a less-optimistic slant:

Even by Massachusetts political standards, this was one of the worst non-campaign announcements ever.

U.S. Rep. Stephen F. Lynch’s bungled will-he-or-won’t-he drama over his possible entrance into the U.S. Senate fight left voters confused and Democratic leaders shaking their heads — not a great start for a campaign.

If Lynch does announce he’s getting in the Democratic primary against U.S. Rep. Edward J. Markey — and many Democrats and Lynch supporters are still convinced he will — the first question will be: “When did you decide to run — before or after your advisers prematurely leaked word you were running and you denied it?”

Crosstown-rival Boston Globe gives its conjecturing the power position: Page One (via ditto) upper right above the fold:

The Frank Phillips/Michael Levenson piece indicates that Scott Brown (R-Show Me the Money) might be leaning toward skipping a third Senate bakeoff in three years and running instead for governor in 2014. Enter the Great Mentioner, starting with former Massachusetts Gov. Bill Weld:

Weld did not return calls seeking comment. But his associates said it is highly unlikely the former governor, who returned to Boston this fall after living in New York for a dozen years, would plunge back into politics.

“He has no interest,’’ said Stephen Tocco, a partner with Weld at ML Strategies, a public affairs consulting firm. “He is too busy growing his practice and settling into Massachusetts.’’

Not to mention Weld has said (as noted by the hardreading staff) that not running for office is a condition of his employment at ML Strategies. Although – yes, yes – contracts are made to be broken.

Another high-profile Republican — Kerry Healey, the former lieutenant governor — did not rule out a Senate candidacy, saying only that it is “premature to say’’ if she would be interested in the seat if Brown does not run.

Conspicuous by his absence was Charlie Baker, who ran a credible if largely uninspired campaign for governor in 2010. It will be interesting to see if in the next round of chinstroking, Baker is part of the mix.

Say, that was some scoop the Sunday Boston Globe got about the fussin’ and fightin’ among the Kennedy clan over the Edward M. Kennedy Institute for the US Senate, yeah?

A RARITY IN CAMELOT: A PUBLIC FAMILY FEUD

The already frayed relationship between Vicki Kennedy and her late husband’s children is at the breaking point, with the two sons growing increasingly convinced that she is jeopardizing the senator’s legacy and mishandling the creation of the $71 million institute that bears his name.

Much of the conflict centers around the construction and governance of the Edward M. Kennedy Institute for the US Senate, a project that faces potential cost overruns, according to a close family friend who was authorized by some family members to speak on their behalf, but who declined to be named.

At issue: “Edward M. Kennedy Jr. and Patrick Kennedy, the senator’s children, believe their father’s widow is badly bungling the efforts to create what their father had hoped would be a monument to his storied career in the US Senate, said the friend, whose account was confirmed by another close family associate.”

Hard feelings have developed over the institute’s presence in the Kennedy family’s Hyannis Port compound. The institute, which earlier this year took possession of the original mansion and the sprawling lawn, is now charging a rental fee to the remaining family members who own property there if they want to gather on or in some way use the lawn that is the central part of the 2.4-acre waterfront lot.

The institute has also made the main house, which has been virtually unused since the senator’s death in 2009, out of bounds for use by the family.

Allowing the family to freely use the property and the house “would jeopardize [the Institute’s] nonprofit status,” according to Institute officials.

So how did Globe gumshoe Frank Phillips get this story when the Boston Herald didn’t?

Neither son would comment publicly. But their decision to authorize a friend to share their concerns about their stepmother’s leadership role in the institute is a highly unusual public breach within the famous political family, which has traditionally strived to avoid the public airing of internal disagreements and spats.

In other words, Little Ed and Patches picked the Boston Globe to be their House (of Kennedy) Organ.

The Globe didn’t get this story. It came to them.

Keep that in mind when you read it.