As the hardreading staff has noted, the Boston Herald has been alarmingly lax lately about holding its crosstown rival to task, both regarding the Boston Globe’s recent home delivery meltdown and last week’s Let’s remake the paper! We can use John Henry’s garage! memo from editor Brian McGrory.

But the feisty local tabloid is back on the job today, spurred on by yesterday’s front-page faux pas in the Globe’s Ideas section. 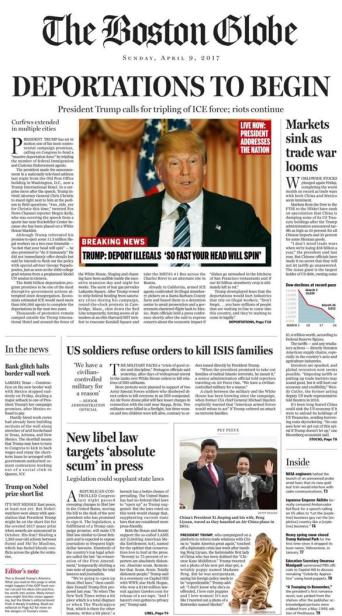 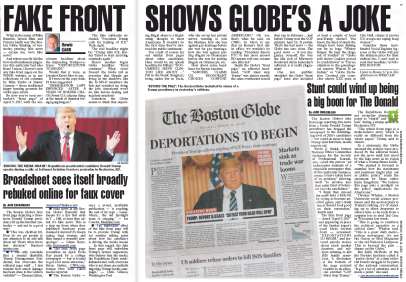 We’ll leave it to you splendid readers to decide whether you want to sample the goods: there’s a media reax piece and a thumbsucker from Jack Encarnacao, while Howie Carr mails in another shopworn litany of Globe mortal sins.

At least we know they’re awake on Fargo Street. Finally.

Tomorrow’s Boston Globe rolls out the first half of it Ideas redesign, described this way to the hardreading staff by someone who knows:

We’re going back to the name “Ideas” for the entire 8-page section, which will include both op-eds, staff columns, traditional Ideas stories and an editorial [to create] an integrated and seamless product across the single section.

Here’s what’s up on the web so far. 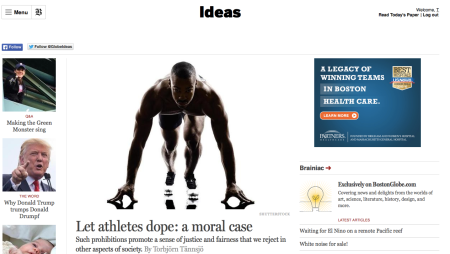 And here’s the editor’s note that will run tomorrow:

“Over the next several weeks, you’ll notice some design updates to our Sunday pages, including a return to the Ideas name. Our weekly Readers’ Forum, curated by letters editor Matthew Bernstein, will move to Saturdays. Expect the same cogent analysis, storytelling, and opinion each week, in a more seamless print package and more robust presence online at bostonglobe.com/opinion.”

The fresh Ideas comes on the heels of bostonglobe.com‘s most recent trip to the powder room, launched Thursday night during the Pats game.

And that’s as the Globe turns right now.

Our stately local broadsheet was one giant bazaar for higher-ed advertising yesterday.

Start with the The New U in the Globe’s Ideas section. 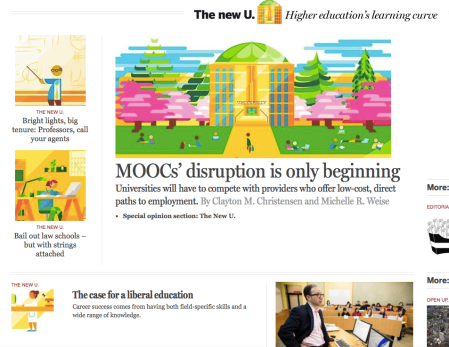 Then check out this all-business ad from Bentley University. 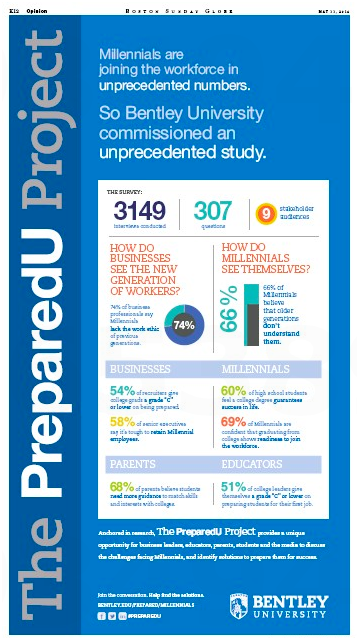 And this full-page ad from UMass Boston. 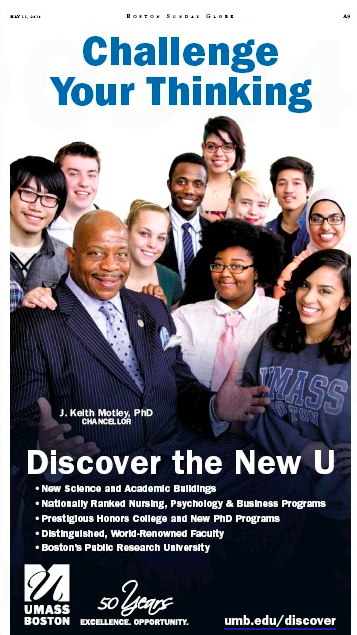 And this UMass Lowell quarter-page (just for scale) ad. 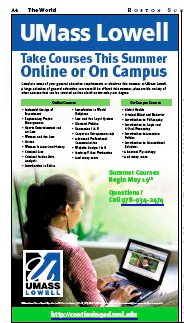 And finally, this big wet kiss from the Globe’s News in Education program. 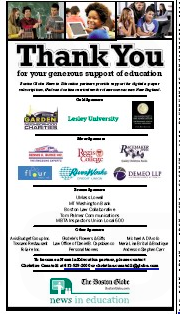 Among the thankees: Lesley University, Regis College, and – wait for it – UMass Lowell.

If you’re looking to dig into Boston’s mayoral scrum, today’s Boston Herald is the place to go. 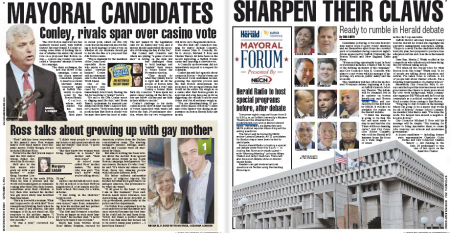 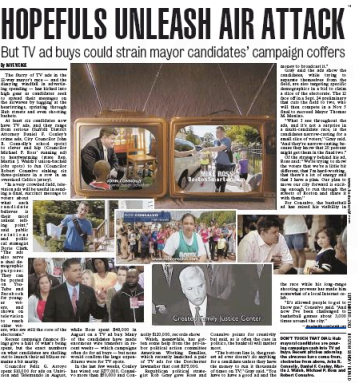 The City Hall bakeoff also gets a column from Suffolk University’s Herald embed John Nucci, along with half of Matt Stout’s Pols & Politics piece.

Crosstown, the Boston Globe has . . . well, a lot less. There’s this story on B2 (print headline):

Says councilors should back citywide vote

Suffolk County district attorney and Boston mayoral candidate Daniel F. Conley on Saturday doubled-down on his calls for a citywide vote on a proposed casino in East Boston and sharply criticized the city councilors running against him for not holding community hearings on the issue.

But despite his repeated calls for a citywide vote, council members continued to stand by their decision to allow East Boston residents exclusively to decide if their community becomes home to casino gambling.

In Boston, identity politics have been such a powerful influence in local elections that candidates have literally changed their identities. Early in his career, future US House Speaker John McCormack rewrote his family history to better align it with those of the local political bosses and to erase any hint of Protestantism. Among other revisions, his Scottish-Canadian father and Boston-born Irish-American mother became Irish immigrants. He was inspired in part by John Way, a Yankee Democrat who repeatedly failed to win office despite running on a staunch pro-Irish-Catholic ticket.

In the 1960s and ’70s, Louise Day Hicks, William Bulger, and others updated identity politics in Boston. Hicks gained popularity as a defender of working-class white interests against desegregation and what she called “civil rights infiltrators.”

And, Waxman writes, “in 1983, the only time a black candidate made it to the final round of a Boston mayoral contest, an electorate sharply divided on racial lines handed Ray Flynn a landslide victory over Mel King.”

What does he want?

For Bostonians to rely less on racial identity in their voting decisions, and “for the candidates to set out individual agendas and give the voters more, and perhaps better, reasons to support them.”

When does he want it?