You splendid readers are no doubt aware of the current rumpus about Jeb “There’s No I in Hispanic” Bush’s identifying himself as “Hispanic” in his 2009 voter registration. That’s normally mother’s milk for the frothy local tabloid, but not in this case. Instead, Jaclyn Cashman defends the next in line of succession at the House of Bush – and takes a whack at Elizabeth Warren in the process.

The 2016 presidential race could come down to the fake American Indian versus the fake Hispanic.

Jeb Bush reportedly identified himself as Hispanic on a 2009 voter-registration form, and yesterday it sparked a social media firestorm. Bush’s camp sought to downplay the kerfuffle yesterday, releasing a statement saying: “It’s unclear where the paperwork error was made. The governor’s family certainly got a good laugh out of it.”

Bush’s son, Jeb Bush Jr., who is half Mexican, poked fun at his dad on Twitter by using the hashtag #HonoraryLatino. The former Florida governor responded to the tweet, “My mistake! Don’t think I’ve fooled anyone! RT @JebBushJr LOL — come on dad, think you checked the wrong box #HonoraryLatino.”

Not like those prune faces at the Grey Lady: “The New York Times, which broke the story, isn’t taking this gaffe lightly. ‘Confusion over heritage,’ the paper declared, ‘is no laughing matter during a campaign season.’”

A full page worth, in fact.

From Matt Stout’s piece: “The ‘Team Walsh’ meeting [tonight] comes amid the increasing likelihood of a 2016 ballot initiative as both Attorney General Maura Healey and Gov. Charlie Baker threw their support behind a referendum yesterday.”

And Jaclyn Cashman writes in her column, “Walsh has even warmed up to a ballot question regarding bringing the games to the Bay State. He learned Bay Staters get furious when they feel their voices don’t matter.”

“Hosting the Olympic Games presents an opportunity to envision and build together the next chapter in Boston’s history. The success of our bid for the Olympics depends on the support of residents and we should only move forward in a way that will bring the greatest benefit to the City and its neighborhoods. Over the next year, I encourage residents to engage in a conversation to learn more about what the Olympics could mean for Boston and the entire Commonwealth, and to put forward any suggestions or concerns. The Olympics offers a catalyst to unlocking our full potential and only through collaboration can we take advantage of this chance to elevate Boston to new heights.”

Then, several hours ago, this popped up on the Herald’s website:

The head of Boston 2024 today set a date for a binding statewide referendum on the Boston Olympics — and vowed to give voters in Boston veto power over the controversial project.

“We believe now is the time that 2024 would like to propose a referendum in 2016,” Boston 2024 chair John Fish told the Greater Boston Chamber of Commerce. “What that is saying is that: let the voters vote — not just the voters of Boston — but a referendum statewide. What we will commit to is if the statewide referendum passes but the voting bloc in Boston doesn’t want the Olympics, we won’t host the Olympics.”

There you go. Or there the Olympic bid goes.

The Herald Runs on Dunkin’

As our Walt Whitman desk attests on a regular basis, the Boston Herald is a past master at using its newshole to promote . . . that’s right – the Herald. And now apparently, the fuzzy local tabloid is offering the same sort of ad-itorial package to its advertisers.

Witness the latest installment of the paper’s daily plug for Boston Herald Radio, the webcast that up to several people a day listen to.

Nice bit of venial synergy for Dunkin’ Donuts, eh? Lede of the “interview” at left.

You gotta hear this segment to believe it. Those Heraldniks sure can take the r out of radio.

So. Is the Massachusetts Democratic gubernatorial primary primarily – inexorably – changed now that the candidates have had their debate on Boston Herald Radio?

Start, as  always, with Page On, the top half of which touts the Big Bakeoff.

Inside, the Herald has two pages of new/hype in anticipation of the main event.

Tale of the tape:

And just in case you haven’t grasped the transformative power of a debate on Internet radio, the Herald scribes all strike the same chord in their ledes.

Leave your talking points at the door. Save your stump speeches for the campaign trail. At today’s Boston Herald Radio debate, we’re aiming for a free-flowing conversation where we’ll learn more about the three candidates facing off in the Democratic gubernatorial primary.

It’s a long shot, but there’s still a way for Attorney General Martha Coakley to lose the Democratic gubernatorial nomination, and it would have to start at today’s Boston Herald Radio debate.

Coakley’s campaign is showing signs of cracking. Democratic party leaders are getting worried it will be 2010 all over again.

Believe it or not, the primary election is just over two weeks away, and Democrats face a critical choice on who will represent their party in November. The timing of today’s Democratic gubernatorial debate on Boston Herald Radio makes it pivotal, and likely to set the tone for the closing days.

As of 1 pm – the debate’s over, the poll numbers are out – here’s the only coverage the hardsearching staff could find: A Boston Globe online recap.

In bitter debate, Democratic gubernatorial candidates take aim at each other, Baker

In the most bitter debate of Democratic gubernatorial race so far, Treasurer Steven Grossman sharply questioned the judgment of frontrunner Martha Coakley, painting her a protector of the Beacon Hill establishment, as former Medicare and Medicaid chief Don Berwick attacked his two rivals for their support of casino gambling in the state and their years-long embrace of “politics as usual.”

Coakley, the attorney general, defended herself, offered a few hits on Grossman, but also aimed some fire at Republican Charlie Baker, who is expected to be his party’s gubernatorial nominee.

Just over two weeks before the Sept. 9 state primary, the three Democratic candidates vying for their party’s nod upped their rhetoric against each other right from the beginning of an hour-long Boston Herald Radio debate at the newspaper’s Seaport headquarters. 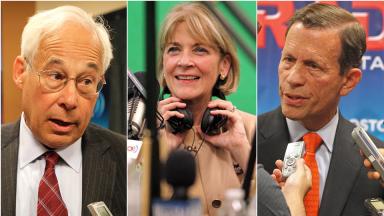 The debate between the Democratic candidates for governor kicked off in high gear today as Treasurer Steve Grossman went on the attack over Attorney General Martha Coakley’s $100,000 settlement with a lobbying group.

“It’s the worst form of judgment,” said Grossman, who slammed what he called the go-easy environment on Beacon Hill.

Not so easy-going off Beacon Hill though.

The Herald knows it’s not who listened to the web stream of the debate that will determine its impact. It’s the play the debate gets in the rest of the news media that counts.

Yesterday our feisty local tabloid celebrated itself and sang its Press Party with a full-page ad. 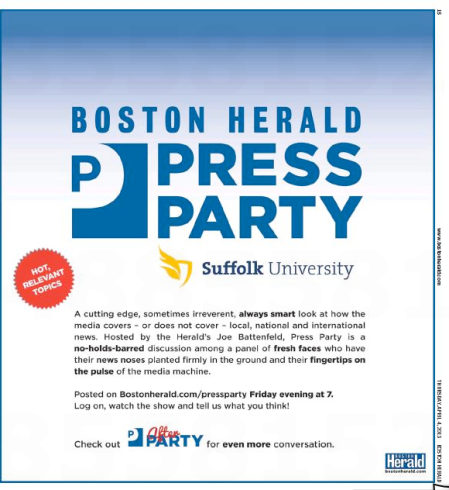 Got that – always smart, no-holds-barred discussions from fresh faces with their news noses on the ground and their fingertips on the pulse of the media machine?

Two observations: 1) That has to be painful; and 2) Could this be any more baldly aimed at WGBH’s Beat the Press?

Regardless, to promote tonight’s version of Press Party, the Herald coughs up not a full-page ad but a lousy quarter-page of  – what to call it? – promotorial.

Just in case you’re curious about the promotorial content:

Coming up tonight: Our next installment of the Great Boston MediaWatch Dogfight.  Ask for it by name.

Apparently, the ladder of success at our feisty local tabloid is actually an escalator. 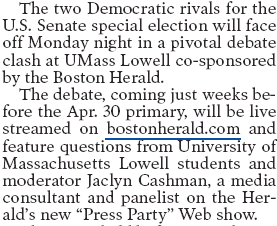