As the hardreading staff has previously noted, Juul Labs  – the company that owns 75% of the e-cigarette market – has locally run ads like these exclusively in the Boston Herald. 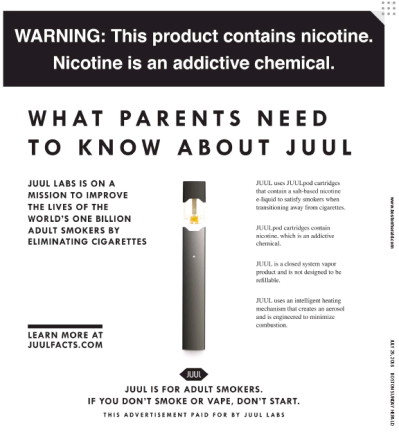 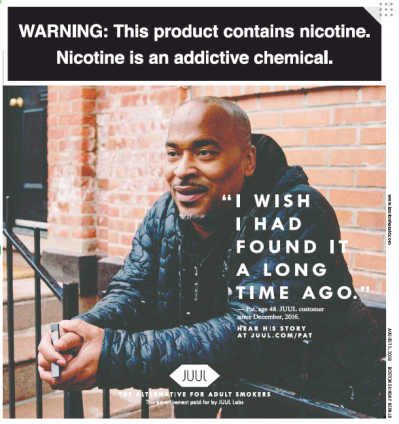 Now, though, faced with numerous lawsuits, Juul Labs is in Defcon 2 as our kissin’ cousins at Campaign Outsider have deftly noted, not to mention this piece by Lachlan Markay and Sam Stein in The Daily Beast.

The company has embarked on a massive lobbying campaign designed to reach the Congressional Black Caucus. 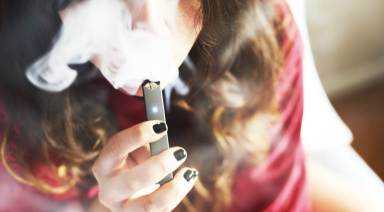 The vaping industry’s unrivaled leader, Juul, is making a huge push to ingratiate itself with America’s communities of color, hoping that doing so will win it critical allies within the Democratic Party who can help it navigate a high-stakes legislative and regulatory minefield.

The company has hired lobbyists and consultants with deep ties to prominent black and Latino lawmakers, steered money to congressional black and Hispanic caucuses, and made overtures to leading civil rights groups. It has enlisted the services of a former head of the NAACP, a board member of the Congressional Black Caucus’s political arm, and the Obama White House’s top civil rights liaison. And it’s sought the support of National Action Network chief Rev. Al Sharpton.

Two Daily Town rule of thumb (pat. pending): Whenever Al Sharpton is involved, kindly walk – do not run – to the nearest exit.

Given all that, Juul has now embarked on a full court press of full-page ads in the New York Times, Wall Street Journal, and Boston Globe.

But not the Boston Herald.

Your condolences for the thirsty local tabloid go here.

Is Adriana ‘Cohen Away’ from the Boston Herald?

Sharp-eyed readers of the feisty local tabloid might have noticed a few changes this week at Boston Herald Radio.

First, though, here’s what the lineup looked like as recently as last Friday. 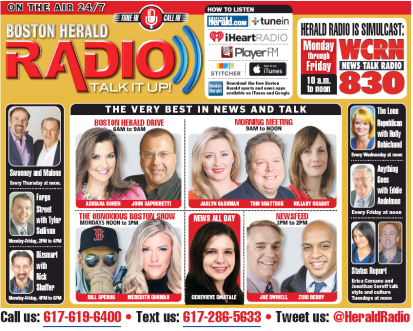 And here’s the new one. 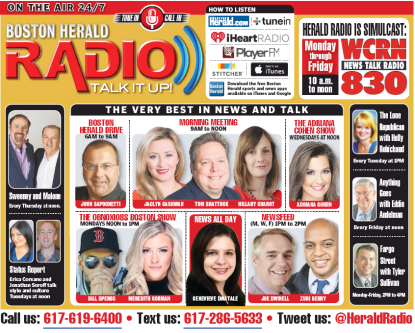 The change that jumped out at the hardreading staff was the shifting of Herald columnist Adriana Cohen from the daily 6 to 9 morning slot to an hourlong Wednesday gig at noon.

As Ernie Boch Jr. might say, step on down!

But the more we thought about it, the more we started to wonder if this might be a transitional move while Cohen waits for a spot in the Trump administration.

After all, Yo Adriana was one of the most reliable of Trumpkins during the 2016 presidential campaign, although she tragically failed to make The Daily Beast’s All-Star roster of “The Donald’s Army of Media-Hungry Cable News Boosters.”

Which doesn’t seem right since Cohen was willing to do stuff like this (starting around 1:22):

But that kind of smashmouth politics is just what Trump tends to reward, so don’t be surprised if Cohen drifts down to D.C. sometime after the first of the year.

(Hey – maybe she and Trump coatholder Howie Carr could room together!) 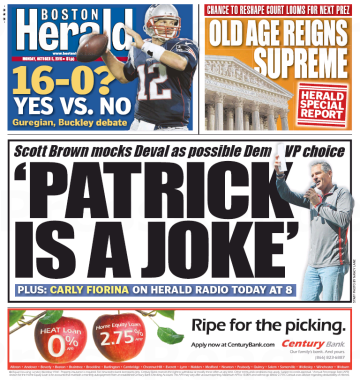 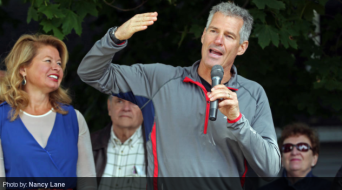 Gail in a Huff Over Scott’s AdvoCare Brownout

From our Late to the Pill-Popping Party desk

Back story, via the Boston Globe‘s Stephanie Ebbert. 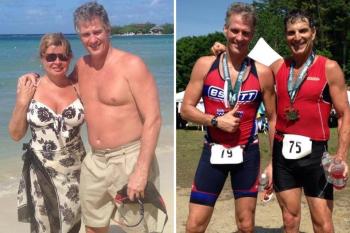 It was not the sight of their former senator bare-chested that shocked Scott Brown’s Facebook followers.

They were used to that.

It was the sales pitch accompanying the before-and-after photos of his physique, crediting his recent, dramatic weight loss to a commercial nutrition and fitness plan.

Brown’s testament to the merits of AdvoCare’s “24-day challenge” was met with so many guffaws that within two hours, he posted another note, saying he is not a paid spokesman for the supplement company.

What he didn’t explain is that he’s a salesman.

Except he’s not, according to Brown’s wife Gail Huff.

From the Boston Herald’s Inside Track yesterday. 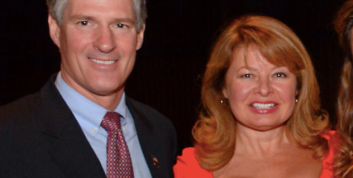 The wife of former Massachusetts U.S. Sen. Scott Brown leaped to his  defense yesterday, saying her husband was never a salesman for a controversial diet program, never intended to sell it and was only listed as a distributor of AdvoCare in order to get a 20 percent discount.

“He was never a salesman, he never made a penny from it,” Gail Huff told the Track. “At no point did he ever suggest anyone ever purchase it. He is not selling diet pills.”

At least according to The Daily Beast’s Olivia Nuzzi, who got this response when she asked Brown for an interview about AdvoCare.

“Olivia … Thanks for emailing me about your interest in Advocare . . . I am here to help you get started. As you can see from my story and pictures, these products from Advocare really do work.”

Brown is offering me the following: “20-40% off products” if I become an AdvoCare distributor; “Nutrition and Fitness guidance to maximize your results”; and “product regimens to help you reach your goals.”

Not to get technical about it, but Nuzzi’s only goal was to expose Scott Brown as a cheap grifter. Which he sorta seems to be.

I asked Brown if he had ever experienced any side effects while taking the product, and he responded, “Not at all I’ve been taking the products with Advocare for 10 years and they have treated me great. Thanks.”

10 years? On Facebook and in his email advertisement, Brown said he had been introduced to the products recently and they are what caused his weight loss.

“Keith has been taking them for 10 years through his baseball career,” Brown said when I told him his response didn’t match the rest of his story. “He turned them on to me a few months ago. Thanks.”

‘Binder’ Blinders at the Boston Herald?

The Binders Full of Women rumpus,the latest screaming meme in the flogosphere, has turned the spotlight on Mitt Romney’s hiring record as Massachusetts governor from 2003-2007. The local dailies both take a look at that record today, with differing results (stop the presses, eh?).

From the Boston Herald:

The frenzy whipped up by Mitt Romney’s claims of poring over “binders full of woman” to ensure his cabinet wasn’t male-dominated drew a sharp response from both sides of the aisle yesterday — Democrats disputing the notion he actively sought out female candidates and Republicans rushing to defend his Bay State record.

Romney, in Tuesday’s debate, said his administration “took a concerted effort to go out and find women” for his cabinet, adding he turned to women’s groups, who provided “binders full of women” . . .

“He has surrounded himself with talented women’s voices,” Healey said last night. The Herald reported during Romney’s administration that the percentage of women in top jobs rose only slightly, from 30 percent to 31 percent, but MassGAP did not fault him, telling the Herald in 2006 three-fourths of top jobs had holdovers.

The Boston Globe, however, tells a different – and less flattering – tale:

The story behind Mitt Romney’s ‘binders full of women’

WASHINGTON — In the debate on Tuesday night, Mitt Romney said that he made every effort to find qualified women for Cabinet positions when he was governor of Massachusetts.

“Well, gosh,” he said he told his staff who had an abundance of male applicants, “can’t we find some — some women that are also qualified?”

“I went to a number of women’s groups and said, ‘Can you help us find folks?’ ” Romney added. “And they brought us whole binders full of women.”

The awkward turn of phrase — “binders full of women” — immediately took off online and triggered a day of back and forth between Democrats and Republicans over who can best represent concerns of women. A Facebook page, called “Binders Full of Women,” was created and by midday had nearly 300,000 likes. Dan Lacey, an artist known for political parodies, was selling a painting on eBay of Romney holding two binders with female legs coming out of them. A Tumblr page, with spoof images, was created, and President Obama resurrected the line during a campaign stop in Iowa.

That’s not the less flattering part, though. This is:

About midway through Romney’s four-year term, 42 percent of his 33 new appointments were women, according to a study done by the UMass Center for Women in Politics and Public Policy using some of the data collected by MassGAP.

But over the next two years, women made up only 25 percent of the 64 new appointments Romney made. By the end of his term, women made up 27.6 percent of those in high-ranking positions overall, which was slightly lower than it was before Romney took office.

As always in this post-truth presidential election, pick the numbers that suit you best.