On a day that the Boston Globe has produced fabulous, comprehensive coverage of last night’s Red Sox World Series Championship win, it might be easy to miss (and churlish to note, some would say) that the New York Times provided 50% of the paper’s A section today. (Associated Press 27%, Boston Globe 22%).

Page A4 was entirely picked up from the Times. 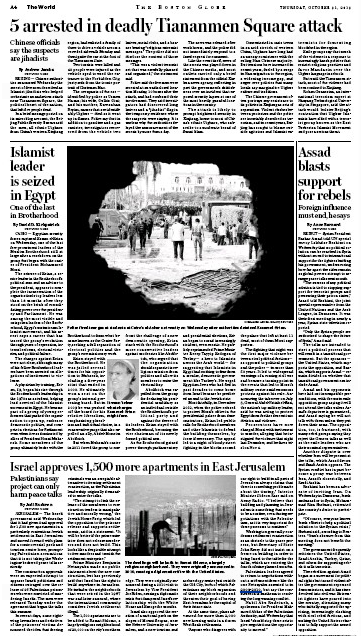 Don’t get us wrong: We realize the majority of the Globe’s A section has to consist of wire-service reports; that’s the reality of the Texas-chainsaw newspaper business. Beyond that, we recognize the Globe is a big local newspaper with a big local footprint.

Not every day, though, features a World Series win. Almost every day, on the other hand, features an A section that’s Times Lite. Given the financial relationship that Red Sox owner John Henry just ended between the Globe and the Times, the latter’s lingering presence seems, we dunno, weak. And 50% is a lot of lingering.

Media Nation’s Dan Kennedy made a strong case last week about  Why John Henry should dump Times content. Today’s edition only buttresses that.

Call us the halfreading staff today. Earlier this morning we got a call from a Heraldnik saying the fusty local tabloid was experiencing printing problems so we might get our home-delivered copy of the Boston Herald this afternoon or maybe (and more likely, we’re guessing) along with tomorrow’s edition.

Seriously? Then again, we have had these kinds of problems before.

Just for the record, here’s Page One of today’s Boston Herald (via their E-Edition): 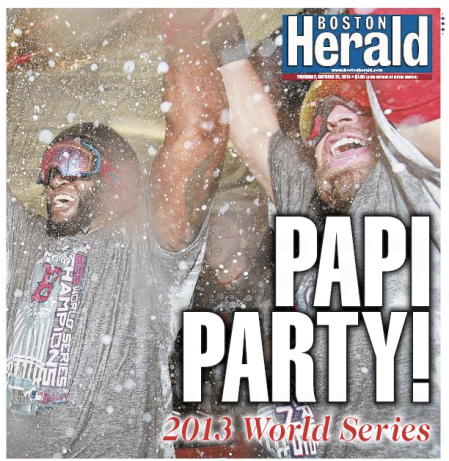 And in the interest of fairness, here’s the Boston Globe’s front page: 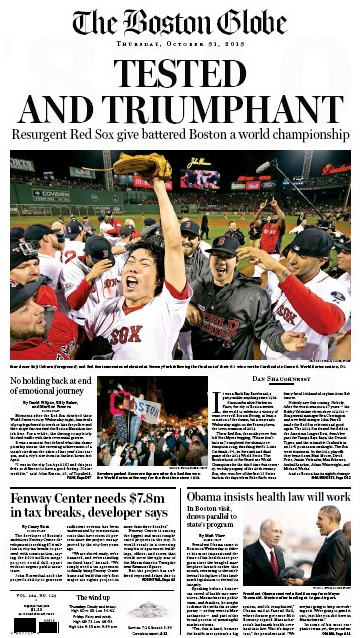 That one we got at home.

Sickly Sweet Baby James sang both the national anthem and “America the Beautiful” for Game 2 of the World Series Thursday night, as both local dailies kind of reported.

Five-time Grammy Award winner James Taylor is doing his part for a Red Sox World Series victory … and he’s getting some heat for it on the homefront!

“Well, you know it takes a long time for me to grow a beard, and this one is a couple of weeks old, and it’s not really a beard, I just look like an unshaven person,” Sweet Baby James told the Track. “There’s a lot of pressure on me at home to shave this thing off.”

But Taylor, who performed the national anthem and “God Bless America” at Fenway for Game 2 last night, said he’s committed to taking one for the team.

Singer James Taylor, who’s been hard at work at his home in the Berkshires on a new album, took the turnpike from Stockbridge to Boston to sing the national anthem (and, with wife Kim and son Henry, “America the Beautiful” during the seventh-inning stretch).

But here’s what just about everyone else reported (representative sample via The Hollywood Gossip):

James Taylor sang the Star Spangled Banner prior to Game 2 of the World Series between the Boston Red Sox and the St. Louis Cardinals last night.

But the veteran artist initially thought he was on hand to belt out a version of “America the Beautiful,” getting a couple of words into that ode to this great nation before course-correcting and serenading fans at Fenway Park with the national anthem.

The hardreading staff will let you know if today’s local dailies admit the omission.

And whether “God Bless America” is the same as “America the Beautiful.”

The hardreading staff had a neighbor some years ago who objected to our Boston Herald home subscription on the grounds that a Herald on our front porch “reduced property values.”

But now we’re wondering about the value of the Herald itself. 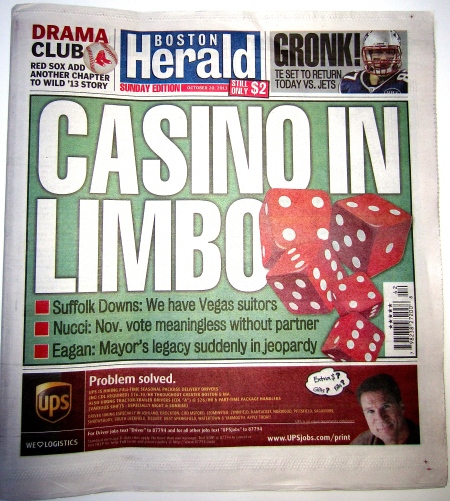 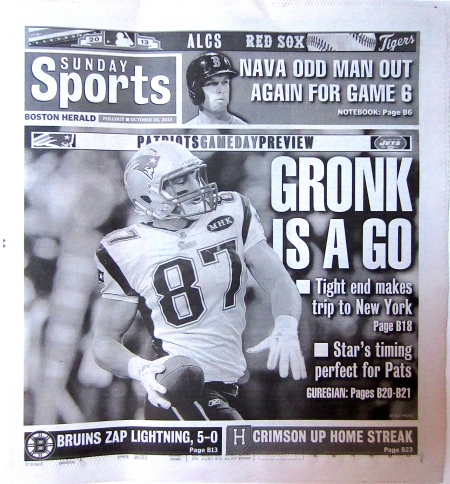 (Photos courtesy of the Missus)

Sure, later editions (and the electronic edition) of the Herald sported this front page: 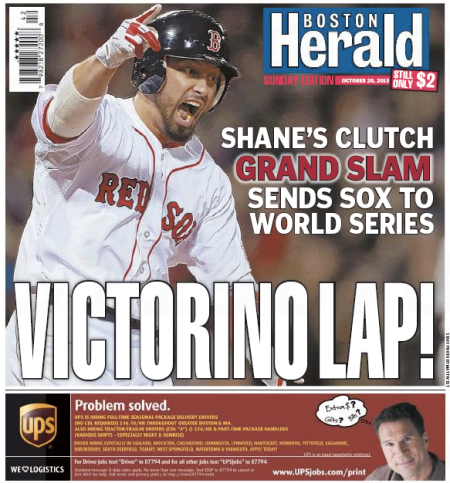 But that didn’t do the hardreading staff any good.

The thing is, as home subscribers we’re the guaranteed money for the fusty local tabloid. And all 17 of us are getting lousy value for the dollar.

The hardreading staff, for one, is not happy.

But not so fast, says crosstown rival Boston Herald. 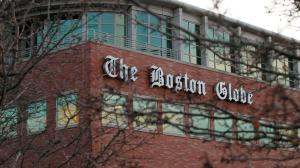 two decades under the control of its out-of-town overlords.

A source close to the deal told the Herald yesterday that finalizing the purchase and executing the formal transfer of the newspaper from the Times to the Red Sox owner — which had been expected to happen sometime over the weekend — likely won’t take place until next week at the earliest.

Both the Globe and a rep for Henry declined comment yesterday, and a Times spokeswoman did not return calls or emails.

But no surprise here: Others say otherwise.

According to the Boston Business Journal, Red Sox Owner John Henry will close on his purchase of the Boston Globe this Saturday. Henry is buying the New England Media Group, including the Globe, from The New York Times. The BBJ said he’ll also pay $65-million, down from the original $70-million bid.

The hardreading staff gets it that Pennant Fever Grips Hub Tabloid (just check out pages 1 through 5, along with the actual Sports section).

But then the feisty local fanzoid goes overboard.

From today’s Back Page: 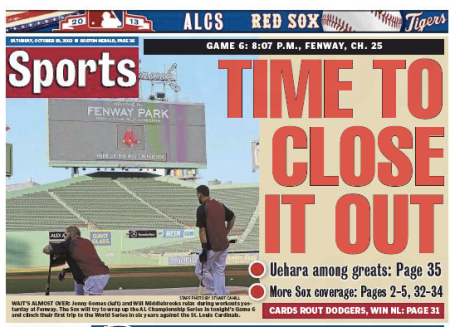 The guy has 24 saves. Lifetime.

Including his five-out save Thursday night against the Detroit Tigers in Game 5 of the AL Championship Series — which, with Game 6 set for tonight at Fenway Park, moved the Red Sox to within one win of going to the World Series — Uehara has a 0.52 ERA, 24 saves in 26 chances, and a ridiculous 70-to-2 strikeout-to-walk ratio in 48 appearances since taking over as closer in mid-June.

That’s a great year, no question. But then to start tossing in names like Eric Gagne (major-league-record 55 consecutive saves) and Trevor Hoffman (601 career saves, second-most all-time) seems a bit premature.

And not to get all such-small-portions on you, but how do you do a whole piece on great closers and never mention Mariano Rivera – the greatest of them all – once?

Chalk this up as a blown save.

P.S. Before anyone says the piece is based on catcher David Ross calling Uehara great (“Yeah,”  Ross said yesterday, “I’ve caught a lot of great closers in my career.” Koji Uehara? “Right up there,” he said, never hesitating), that means Uehara among greats should have been in quotes. Otherwise, the Herald owns it.