As of Wednesday, the S.S. Globe was still listing to port, a fact Globe editor Brian McGrory conceded to WGBH’s Boston Public Radio in a rather roundabout manner (round about 1:41;00).

We’ve been on a difficult run over over here. We’ve had many many good nights putting out the newspaper; we’ve had some bad nights too. This all stems from we opened up a new production plant in the city of Taunton back in the spring; we had to leave Morrissey Boulevard because we’re in the process of selling that property, and it’s proven more difficult than we anticipated to get quality newspapers out in a timely way, and it’s gone on for quite a while.

Decisions were made over here this week to try to get new leadership in place in production and the result is some very very good high quality people are no longer here at the Globe. And that doesn’t mean they didn’t have a major contribution to this place over many many years – they should be proud of what they’ve done. But the decision was made by people at a higher pay grade than me that we needed new leadership. I expect that’s gonna work out well.

Uh-huh. Asked whether the Globe is making progress toward fixing the snafus, McGrory said this:

“We think we’re making progress, yeah. We’ve had some very very good stretches – a week, two weeks at a time with some improving quality but then we’ll have significant setbacks. We did this past weekend on Saturday night. A lot of papers didn’t get to our subscribers on Sunday, which is obviously a really important day for us, and, you know, amid the progress there are setbacks and it’s really really frustrating.

“But the overall trendiness are showing improvement, but we need it to come faster and we need to be more consistent. We owe it to our most loyal readers, who are the most sophisticated newspaper readers in this country.”

That’s it – not a word, or a question, about the damage inflicted on the Herald. Just 10 pounds of baloney in a five-pound bag.

Meanwhile, how’s the Good Ship Lollygag doing at the end of the week?

Well, the hardreading staff didn’t get its copy of the Herald this morning. So you tell us.

The Boston Herald has long been the venue of last resort for full-page ads of the advocacy/corporate image/memorial sort.

As it was yesterday, when the Herald was bypassed by two ads that ran in the Boston Globe.

First, this Boston suck-up ad from GE (which in this town stands for Got Everything.)

Then, this Boston Ad Club full-page backpat honoring diversity in a town that has long hampered diversity.

To be fair, yesterday’s Herald did feature this full-page bank ad.

As well as this half-page Massachusetts tax amnesty ad.

Neither of which ran in yesterday’s Globe.

Still, there’s no question that the Herald is an afterthought in the eyes of local advertisers.

Which makes it all the more interesting that the feisty local tabloid seems to enjoy better fiscal fitness than the stately local broadsheet, which is now desperately downsizing (tip o’ the pixel to the redoubtable Dan Kennedy at Media Nation) as it moves from its sprawling Morrissey Boulevard home to cramped quarters in Boston’s financial district.

So who’s really at a disadvantage, eh?

Excellent compare ‘n’ contrast material in today’s Boston papers. Let’s start with the jokes, shall we? 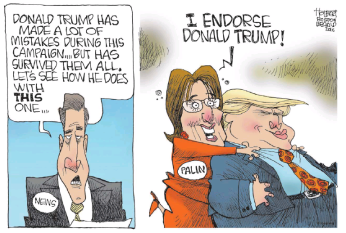 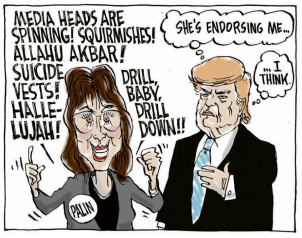 That pretty well sums up the one-and-a-half sides of Sarah Palin, wouldn’t you say?

Then there’s Patriots Darius Fleming’s dramatic, window-shattering rescue of a woman trapped in a car after a three-vehicle crash on Route 1 in Walpole last week. Story in the Herald:

The New England Patriots player who police said did the right thing by rescuing a woman trapped in a car took to Twitter late yesterday to condemn all the haters who doubted his good deed.

The Globe had quite a different story.

Patriots backup linebacker Darius Fleming played in Saturday’s playoff victory over the Chiefs with 22 stitches in his right calf, two days after cutting his leg after he kicked out the window of a car to assist a woman who had just gotten into a three-car accident on Route 1, near Gillette Stadium.

“Obviously he had no regards for himself. Just wanted to get the girl out,” said eyewitness Stephanie Kube. “Came in, saved the day and left. A true hero.”

Not a word about the trolls.

Nor did the lately local broadsheet have a word about racial tensions at Boston Latin School, which was Page One in the Herald. 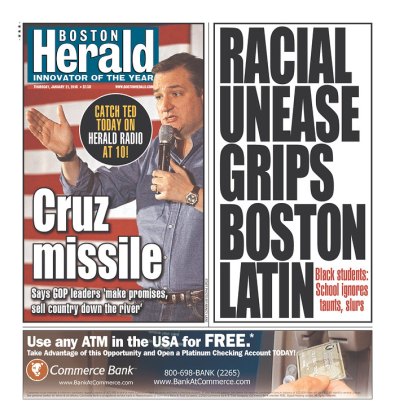 Black students at Boston Latin, the nation’s oldest, most prestigious public school, set off a social media firestorm this week, accusing the elite exam school of ignoring the casual use of racial slurs and offensive online taunts.

In a YouTube video posted Monday, two students representing a group called Black Leaders Advocating for Change and Knowledge said the school has turned a deaf ear to their concerns about classmates’ racial slights.

“We are here to make our voices heard, to show BLS administration and everyone that we refuse to be silenced and we’re not afraid to speak up,” the students say in the video. “We’re here to use this campaign to unite our community, to unite the community of black alumni and the students of color at BLS and schools like it.”

Examples from the tweetly local tabloid:

Ask John Henry: What Exactly Does a COO Do?

now that publisher Christopher Mayer has stepped down.

The question is, what is a COO?

The Globeniks better hope it’s nothing like the chief content officer position Time, Inc. recently established for its publications.

As the hardtracking staff at Sneak Adtack noted last fall, Time, Inc. CCO Norman Pearlstein is now the person that both the business side and the editorial side report to, “leading some to wonder whether business interests would now trump those of edit.”

According to New York Times columnist Joe Nocera, Pearlstein “praised the model being developed by Forbes magazine, which includes ‘sponsored’ content alongside the work of its staff writers. He said that the business side would not be able to hire an editor unless he went along with it.”

Be afraid, Globeniks. Be very afraid.

As you’d expect, the Boston Herald is on John Henry’s purchase of its crosstown rival like Brown on Williamson. Here’s today’s double-barreled shot at the Globe (don’t ask about the little green numbers – dunno): 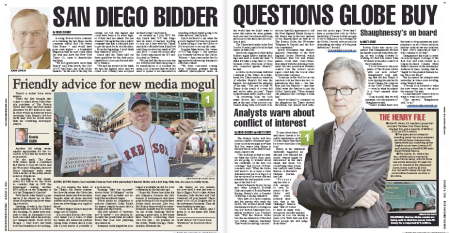 To get a sense of the first runner-up in the Boston Globe’s automatic markdown sale, check out the lead story:

A losing Boston Globe contender is claiming his San Diego media company outbid Red Sox owner John Henry — and would have gone even higher — a bombshell allegation that he says could delay the deal and leave the New York Times Co. open to shareholder backlash.
“We bid significantly more than Henry,” said John Lynch, the CEO of U-T San Diego, one of the Globe finalists. “At the end of the day, I’m certain our bid was higher and could have been a lot more higher if they had just asked. I’m just stunned. I thought this was a public company that had a fiduciary duty to get the most by its stockholders. … From the beginning, I don’t think they wanted to sell to us.”

Maybe they had grammatical objections. Or maybe it was U-T San Diego owner Douglas Manchester’s reputation for “aggressively influencing his paper’s editorial content.”

Regardless, Lynch added that “there are going to be ramifications to it because we spent a lot of money that we didn’t need to spend or are interested in spending if there wasn’t going to be a fair auction.”

Speaking of unfair, here’s Howie Carr’s contribution to the rumpus (and by unfair we don’t mean to the Globe, but to Herald readers who pay good money for this recycled slop):

There’s a sucker born every minute.

That’s the first thought that comes to mind about John Henry’s purchase of The Boston Globe and other assorted media dinosaurs for $70 million in cash. In other words, as someone noted yesterday, John Henry’s 164-foot yacht may well be worth more than his crumbling newspaper empire . . .

Speaking of which, the Globe’s rumpswabs are surely in a dither this morning. So many new rear-ends to kiss, as Alexander Cockburn once said when his newspaper changed hands. Don’t worry though — they don’t call them bow-tied bumkissers for nothing.

What, is there some hackbot that assembles this crap? Get some new material, man.

The Globe, for its part, tries to play it straight with this front-page splash: 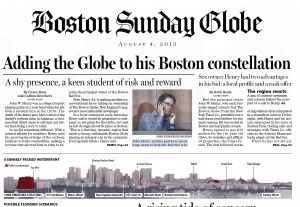 And this may be the reason the U-T San Diego more higher bid didn’t cut it with the Times Co.

Adding the Globe to his Boston constellation

Red Sox owner had two advantages in his bid: a local profile and a cash offer

Red Sox principal owner John W. Henry, who early Saturday signed a deal to buy The Boston Globe from the New York Times Co., prevailed over a half-dozen rival bidders for two main reasons: He was rooted in Boston and had plenty of cash.

Henry agreed to pay $70 million for the 141-year-old Globe, its websites, and affiliated properties, the Times Co. said. The deal followed weeks of negotiations that culminated in a marathon session Friday night, with Henry and his lawyers ensconced in his suite at Fenway Park, trading calls and messages with Times Co. officials as the Arizona Diamondbacks edged out the Red Sox.

Regarding the other bidders, the Globe piece says this:

[Henry’s] was not the highest bid for the Globe, according to people involved in the process. But his offer was appealing to the Times Co. because it was cash, unencumbered by financing issues or a bevy of investment partners. One executive working for the Times Co. said the key was who was best able to get the financing together and close the deal relatively quickly.

Not surprisingly, both papers have stories about the potential conflict of interest the sale creates (Globe here, Herald here).

As the Big J journalists say, time will tell.