Sure, David Ortiz’s Fenway Swan Song turned out to be (Not So) Sweet Caroline as the Sox lost five of their last six, but at least Big Papi got a sweet sendoff in the local dailies.

Sunday’s papers were a Papipalooza of congratulatory ads, with both the Boston Globe and the Boston Herald publishing special Commemorative Sections.

Their front pages gave you a good idea of who was going to win the advertising sweepstakes in the Farewell to Big Arms. 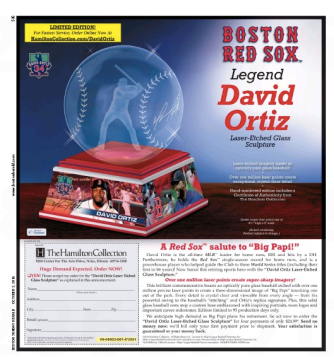 Nothing like a Laser-Etched Glass Sculpture to keep the the memories alive.

Crosstown at the Boston Globe, there was a different class of commemorative ads: New Balance, Mohegan Sun, University of Massachusetts, and – remarkably – the Isabella Stewart Gardner Museum.

No surprise there: That high/low advertising split runs pretty much true to form for the local dailies.

But here’s where it gets interesting: 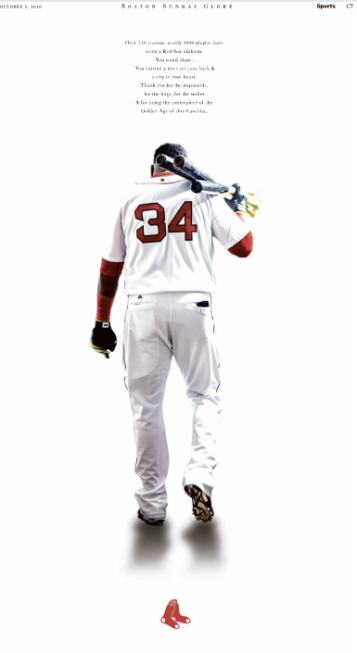 The thing is, Henry did not run the same ad in the Herald, even though that would have been the right (and inexpensive) thing to do.

Over the past months, the hardreading staff has repeatedly noted the increasing presence of lucrative – and corrosive –  advertising by the University of Massachusetts in the Boston Globe, from co-opting the paper’s front page to bugging its banners to mimicking its editorial content.

But then came this from yesterday’s Boston Sunday Globe:

It’s a tough piece that raises tough questions about the fiscal fitness of UMass.

(To be sure graf goes here.)

To be sure, the hardreading staff never said the Globe was in the tank for UMass. We just questioned the appearance of so many financial ties between the stately local broadsheet and the state’s higher-education system. Those ties didn’t seem to matter in yesterday’s instance.

The hardscoring staff will keep you posted.

Here for a reason indeed: To outshout any editorial coverage of UMass in the Globe. That’s show biz, eh?

Another Advertising UMassage at the Boston Globe

As the hardreading staff has repeatedly noted, the University of Massachusetts has slowly been colonizing the Boston Globe, stamping itself on the stately local broadsheet like Marty Walsh on City of Boston signage.

If it feels a little unseemly how much UMass and the Globe are joined at the hip pocket, Erin Smith’s Boston Herald piece today only makes it unseemlier. 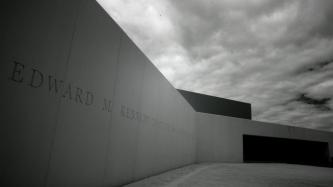 The public relations company representing the University of Massachusetts Building Authority, which hired firms to build the new Kennedy Institute, has acknowledged it solicited those contractors for pricey ads in an upcoming Boston Globe commemorative magazine section.

Julie Kahn, an executive with Regan Communications, said she used a list of vendors provided by the institute, named for the late U.S. Sen. Edward M. Kennedy, to make the sales calls for the ads, which started at $15,000 for a half-page.

So. Regan Communications has as clients: 1) the UMass Building Authority, a public agency that “financed and oversaw construction of the Kennedy Institute on the UMass Boston campus;” and 2) the Boston Globe, which is publishing “a special section to mark the opening of the Institute.”

So. Regan Communications gets from one client a list of companies involved in the construction of the Institute and uses it on behalf of its other client to solicit paid ads to celebrate said building.

Kahn to the Herald: “It went out to everyone they did business with — everyone who profited. I don’t see a conflict. I was just given a list by the EMK Institute that they wanted me to contact. When you do a roast or someone retires, you call all your vendors to give back. This is very common in this business.”

In the PR business, yes. The question here is about the journalism business.

“A lot of contractors were on that list and most of them said, ‘No, we can’t afford it,’ ” she said. “A handful said yes and 80 or 90 percent said no. If there was pressure, I think we would have had a lot more success.”

Fine, but that doesn’t speak to propriety either. Competence, maybe, but not propriety.

(To be sure graf goes here.)

To be sure, the headscratching staff hasn’t settled on whether this mishegoss is the stuff of misdemeanor or felony. We lean toward the former, though. Certainly, it doesn’t sink to the level of the Los Angeles Times/Staples Center train wreck back in 1999.

Even so, given how much the Globe and UMass are playing footsie these days, it really doesn’t look – or smell – all that good for the mately local broadsheet.

As the hardreading staff has previously noted, the Boston Globe and UMass are likethis lately.

The Boston Globe is having quite a financial fling with the University of Massachusetts these days. First it was this “Special Supplement to the Boston Globe” that ran [last fall].

As the hardreading staff noted, that’s “Special” as in “Advertising,” which the Globe would have stated explicitly if it cared to be honest with its readers.

Now comes this doozie in [the 11/13/14] edition of the $tately local broadsheet (photos courtesy of the Missus).

Okay then. That was last fall, when UMass bought the Boston Globe for a day.

Now comes this trifecta in yesterday’s edition of the $tately local broadsheet.

Then, the bottom of Page One:

Then, the back page: 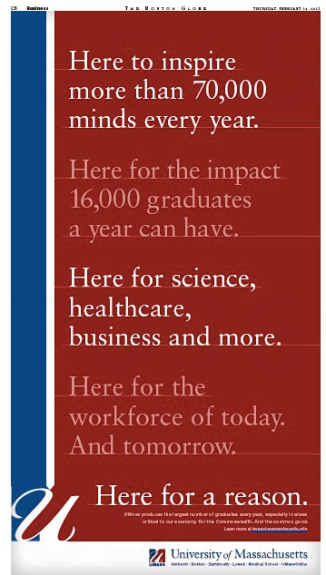